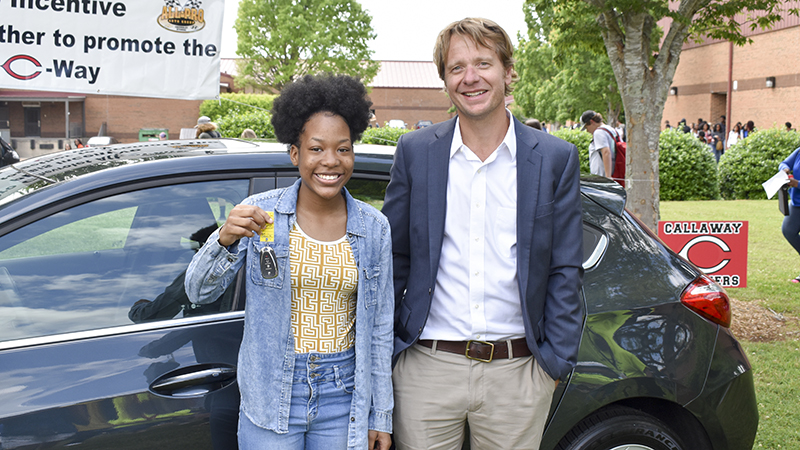 HOGANSVILLE – When 15-year-old Alayvia Delaney arrived at school on Friday, the last thing she expected was to win a new car based off her grades and attendance, but at the end of the day, that’s exactly what happened.

Callaway High School held a drawing for a Chevy Cruz from All Pro Automotive Group on Friday, and students with fewer than six absences, good grades, no disciplinary referrals and plenty of hero points were entered to win the car. However, even though Delaney met all of the criteria, she said it was a surprise when she won, since she spends a large part of her week at THINC College and Career Academy instead of at CHS.

“I didn’t even think I could win,” Delaney said.

Delaney said that she is studying nursing at THINC and hopes to become a nurse after graduation. Now thanks to All Pro, once this sophomore receives her driver’s license, it will be a little easier for her to get back and forth to those classes.

All Pro Owner Cripper Silcox said that All Pro would like to continue sponsoring the program and helping motivate students meeting PBIS guidelines.

He said that the results of the program speak to its success. Callaway Principal Jonathan Laney said the chance to win a new car at the end of the year has proven to be a great way to get students to listen to expectations at the beginning of the year.

Compared to the 2015-2016 school year, Laney said there has been a 45 percent decrease in absences and a 31 percent reduction in referrals at CHS.

He said that change was made possible by All Pro Automotive.

Also on Friday, Jackson Services announced that five Callaway High School students who completed the construction pathway received jobs with the company. Laney said that the local company has been vital in making the program work for students.

“Dale [Jackson] is a strong partner,” Laney said. “This is extremely important to the kids.”