Callaway valedictorian encourages others to push through life’s difficulties 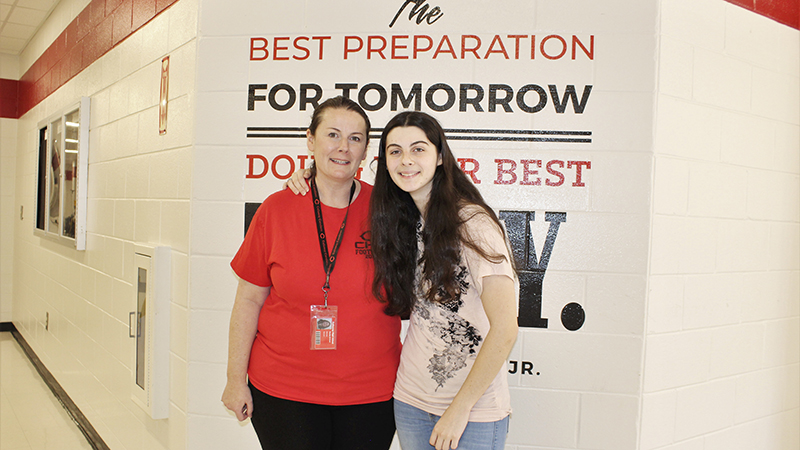 Juliette Stone wouldn’t necessarily describe herself as a military brat, but she said she did grow up in several areas before coming to Callaway High) thanks to her mother, Melissa Stewart, being a servicewoman in the military. Now, her mother is a teacher at CHS and was her biggest inspiration throughout her years of learning, which has helped Stone graduate high school in three years.

“I have a quest and thirst for knowledge and a lot of education ahead of me,” Stone said. “I like taking classes that will push me so I decided to dual-enroll at University of West Georgia in Carrolton. I wanted to take more rigorous classes and see myself succeed.”

She also said early graduation came as a surprise to her.

“It just happened. I didn’t plan it at all,” she said. “This past summer I was offered the opportunity to take two extra classes, and I did. When I started the school year in the fall, I was a junior then in the spring I was told that I was a senior and I was like…Wow!”

She said her excitement almost got the best of her.

“Being valedictorian is so very fulfilling and it shows that my hard work has paid off. It got me somewhere — it got me valedictorian!”

Her advice to upcoming graduates is to, “not let your circumstances get the best of you.”

“My mom had to be the dad and the mom. She had to play all the roles and still push me to do my best. I know a lot of people who don’t have both parents in the household,” she said. “You shouldn’t let something like that change you. You should learn from that and grow with it. It has helped me and they (students) can choose to make it regardless of any situation that is put before them.”

The CHS drum major and flute player also knew that she wanted to enjoy her high school experience, so she decided to stay involved with the band and also take physics on the schools’ campus.

“I go to clubs. I interact with my teachers,” Stone said. “I like to be involved in the culture of the school.”

After graduation, she plans to attend Georgia Tech, where she will major in chemistry or pre-med. She thanks her favorite teacher, David Curtis, for piquing her interest in the subject.

“I hated the subject, but I knew I had to take the class to graduate,” Stewart said. “On the first day of school, he walked into class and blew up a balloon. It turned into blue flames. I was hooked.”

Her future plans are to go into academia like her mother who raised her as a single woman.

“I love the fact that teachers can influence people so heavily,” Stone said. “You can make a difference in people’s lives.”

Troup High valedictorian wrote a vision of being named…