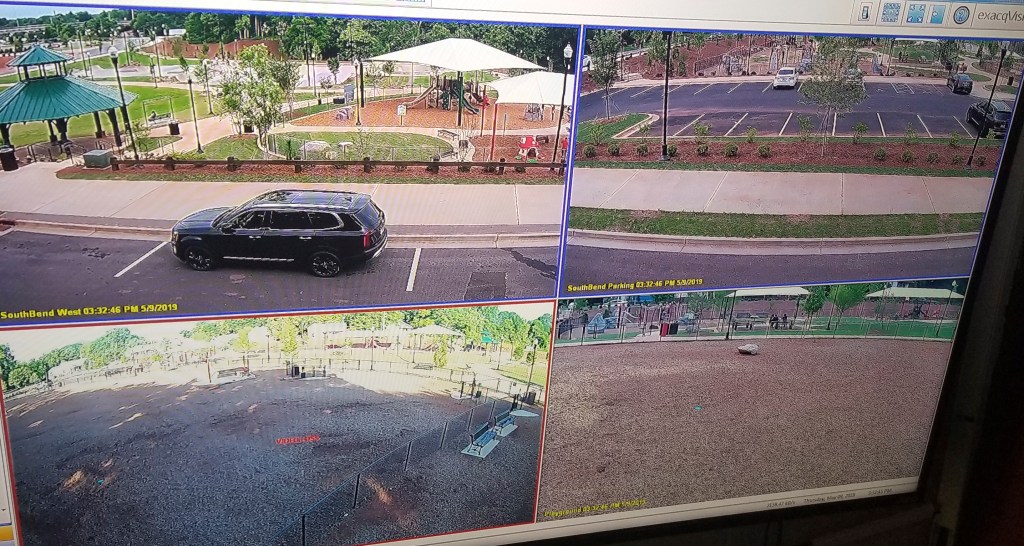 Some of the cameras at Southbend Park are shown in the LaGrange Police Department’s surveillance room.

Earlier this week, the LaGrange Police Department responded to a physical assault at Southbend Park, leading some to voice strong opinions about the safety of the park on social media.

Police Chief Lou Dekmar said one crime is too many. However, since October when aspects of the park were first opened, police have only been called to Southbend Park five times. Two of those five were for unattended cell phones that were potentially taken or misplaced.

Another was for shots fired, which turned out to be a bicycle innertube that had popped. A fourth call was for a missing juvenile that was located the next morning.

Dekmar said he’s not surprised by the low number because the police department doesn’t usually get many calls to any parks in LaGrange, but if there is a disturbance, he’s asking citizens to call the police.

“My plea is any time someone is creating a disturbance, somebody is involved in behavior they believe is unsafe, please call us,” Dekmar said. “We’d rather respond 10 times, and it be nothing than there be the potential for an incident to develop and they did not report it.”

A misnomer going around social media is that there aren’t cameras at Southbend Park.

Dekmar said there are cameras focused on the park, and they have been in place since October. He said the most recent assault incident was caught on camera.

The police department is always evaluating whether more cameras are needed, as they would to any area of LaGrange based on activity reports.

“We have coordinated with utilities to make sure areas are appropriately lit,” Dekmar said. “We are always reviewing based on activity and reports for locating more cameras. This [most recent] incident, we had someone in custody less than 24 hours after it was assigned to a detective. That’s because of the nature of the cameras and surveillance.”

Dekmar said the LPD has received complaints about people using profanity or causing other disturbances, and he recommends calling the police for any disturbance. He said the Southbend Park area is usually covered by officers on foot, bike or patrol.

“If folks see something that concerns them regards to public safety, please call,” Dekmar said. “We take any call serious ,but we are certainly are sensitive to our public parks because we want them used.”