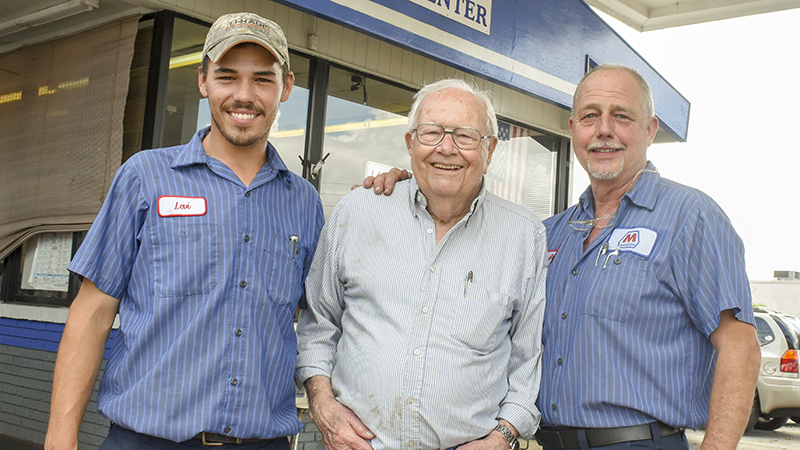 The final full-service station in the area is closing its fuel business after 49 years.

Woody’s Service Center on Commerce Avenue will still be fixing automobiles and renting U-Hauls, but the business will no longer be filling up gas tanks or washing windshields at the pump. Greg Woody said whenever the station runs out of fuel, the gas business will officially be closed. That’s expected to happen at some point in the middle of next week.

“Nobody likes change, but something had to be done,” Greg said, noting that it was no longer profitable.

Since 1970, when Wiley Woody first opened the station, Woody’s has had full service pumps.

The business isn’t only unique because of the full-service station though, it also has three generations of family working together under one roof. Now, the family business is run by Wiley, who is in his 80s, his son, Greg, and grandson, Levi.

On Friday, a customer asked Wiley if he’d ever retire, and as customers have become accustomed to, he had a quick, witty response.

“I guess when Greg runs me off,” he said with a laugh. “Whenever he gets tired of me and sends me home.”

Over Woody’s five decades in business, the world has changed a lot, including most stations moving away from full service. The Woody’s believe they own the last full-service gas station in Troup County.

“Probably the biggest change is generations now don’t know what a full-service station is,” Greg said.

Woody’s eventually added self-service pumps, though many of the regular customers prefer full service. Greg said many of those regulars were saddened by the news that the station is closing its gas business, and some have wondered what they’ll do when they need fuel.

Greg said some of Woody’s customers have never pumped their own gas.

The station was plenty busy Friday, with many customers passing through for fuel, a check of their tires and oil. At one point, Wiley, Greg and Levi were all outside servicing customers.

There have been a lot of fun moments over the years, plus plenty of coffee and deep conversations with customers. Through 49 years, Greg said they always wanted to keep the full-service portion open.

“We enjoyed it so much with the comradery of our customers,” Greg said. “We have some that come up here, and after they get gas, they’ll pull up to the side and come in and sit down and talk.”

Every now and then a customer from out of town would drive up to one of the full-service pumps and get confused when someone ran out to the pump.

“A lot of them are like what are you doing, are you fixing to rob me?” Greg joked.

More than anything, the Woodys said the closure of the business is just the sign of the times.

Levi also said it’s hard for the small business to match the fuel prices of large competitors like grocery stores with gas pumps, or even convenience stores that sell drinks and snacks.

Like his dad, Levi has been working in the family business since he was 12 or 13 years old and never really considered doing anything else.

One of the special parts of pulling up at Woody’s is not knowing which of the Woodys will actually come out to help out at the pump.

The Woody’s also thanked God for their health and the time they’ve had — and still have — to work together.

“He’s blessed us with our health and our customers,” Greg said.

Next week the business’ hours will change to 8 a.m. to 5 p.m. Monday-Friday.