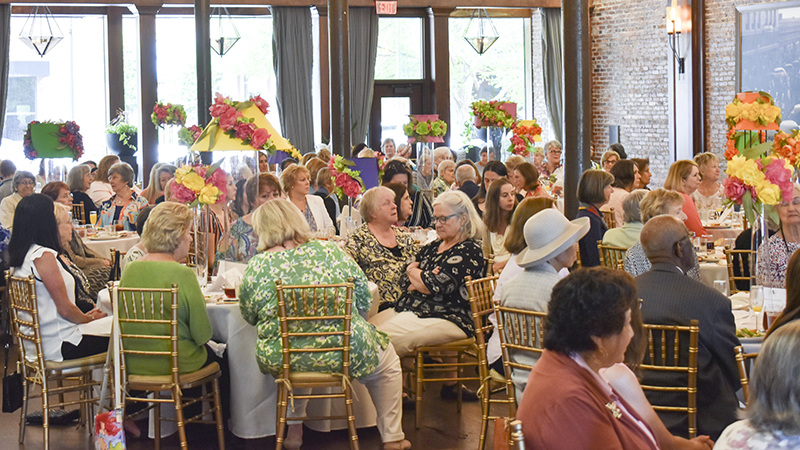 Art lovers gathered at Del’avant on Thursday to hear the story of Carol Cain’s growth into one of Troup County’s best known stage personalities and to raise funds for the LaGrange Art Museum at the museum’s annual Art ‘N Bloom fundraiser.

Cain has been a staple of the local arts community for decades — from her days at Hogansville Elementary School as the backend of a dancing cow to her performance in the “Odd Couple” with the Lafayette Theatre Company mere hours after the fundraiser.

Some of her recent performances have included narrating performances of the Lafayette Ballet Company, serving as the emcee at the Azalea Story Telling Festival, portrayals of the Marquis de Lafayette at several events, providing narration at a LaGrange Symphony Orchestra concert and performing in the Troup County Historical Society’s Mystery in Our History Ghostly Walking Tour, in addition to regular performances with the Lafayette Theatre Company.

In fact, Cain joked that like her character in one of her early performances of “Oklahoma,” she said she is “just a girl who can’t say no.” However, she said that the wide variety of performances that she is able to take part in is due more to the area’s focus on the arts than anything she does personally.

“I am quick to describe us as an arts rich community,” Cain said.

There were a wide variety of items up for auction at Art ‘N Bloom, and LaGrange Art Museum Executive Director Laura Jennings thanked everyone who came out to support the art museum and arts in the community.

To learn more about the LaGrange Art Museum, visit Lagrangeartmuseum.org or visit the museum at 112 Lafayette Parkway on Tuesday through Friday from 9 a.m. until 5 p.m. or on Saturdays from 1 p.m. until 4 p.m.