Cyclists ride through county to raise funds for multi-use trail 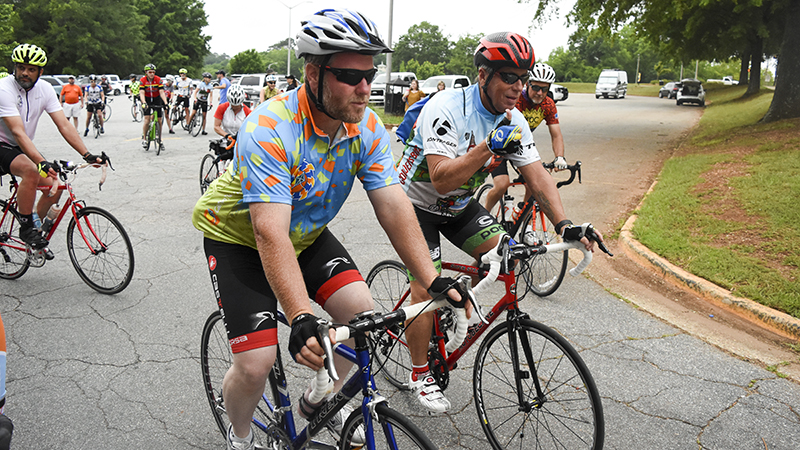 The first Tour de Troup was held in Troup County on Saturday, bringing area cyclists together to raise money for The Thread.

The event started at 6:30 a.m. on Saturday and included a 100-mile ride, 67-mile tour, 35-mile tour and a shorter, 5-mile family ride. The 100-mile ride went through Hogansville, West Point and LaGrange.

Rick Brock, who organized the event and owns Golden’s Bike Shop in downtown LaGrange, said the idea for the tour came from another cyclist, who was joking about needing to start a local bike tour. Brock decided to make it happen, noting many cyclists used to take part in Tour de Lake, a West Point Lake area bike ride that no longer takes place.

Brock is also on the board for the Friends of The Thread and has been involved in organizing the walking and biking trail since its early stages, so he decided to put the ideas together.

“I run across a lot of people that say, ‘well, you’ve got all that SPLOST money to build The Thread’ and they are right. That’s pretty much what’s building it. The part people are missing is that you’ve got to maintain it after you build it,” Brock said. “It’s a lot of money per mile every year, so as The Thread continues to grow, the Friends of the Thread continues to raise money just to maintain it.”

Brock said the original goal of the event was to raise $50,000. Final totals weren’t in Saturday, but he expected to be short of that number, realizing it was a lofty goal for a first-time event.

“I don’t think we are going to make that goal this year, but we are already in the planning stages for next year,” Brock said. “This is going to be a premier thing for Troup County for hopefully a long, long time.”

There were 70 to 75 total riders at the event, which came on a day when heavy rains held off after being forecasted for much of the week.

At the ride, Brock credited the various mile-marker sponsors and CenterState Bank for the major role they played in making the event happen.

Four miles of the planned 29 miles of trails for The Thread have been completed, just two years after the original The Thread’s Model Mile opened by Granger Park.