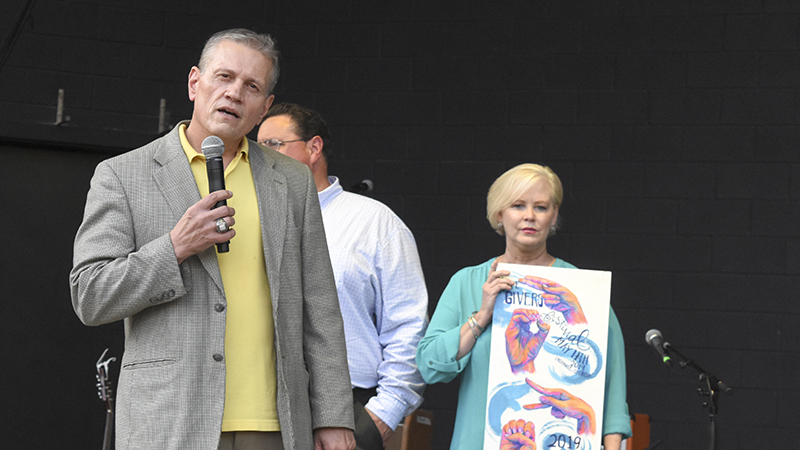 People from all over came together Saturday to listen to music and talk about mental health in a safe environment where everyone was encouraged to open up.

The inaugural Hope Givers Festival was held at Sweetland Amphitheatre Saturday, and Sweetland Director Keyal Loveland said that 1,200 tickets were sold. The event featured Judah & the Lion, Drew Holcomb and the Neighbors and The War and Treaty, but the festival began hours before the music started at 4 p.m.

The idea for the event came after Tamlin Hall’s Film “Holden On” — which was filmed in LaGrange and is based on a true story on mental illness — was shown at Sweetland in fall of 2017. Around 2,000 people showed up for the screening of the film at that time, and Hall and Loveland have worked together since then on this festival.

“If it wasn’t us, who would do it? Who is going to have the vision? Who is going to step forward and talk about this stuff?” Hall said. “To me, this is life changing. This is an initiative that can catch fire. This is something that people need and want, and we are just facilitating this right here in LaGrange, Georgia.”

Mike Angstadt, chair of the Iamholdenon foundation, worked with small groups of students all day, leading them in activities to allow them to open up and communicate.

“There’s a way for all of us to become mentally more well and to have hope in our fellow man — if we allow ourselves to experience that joy and that humanity in others,” Angstadt said.

The LaGrange Art Museum’s live art installation allowed anyone to walk up and paint a rock with a message of hope. The rocks were put together to spell out the word “hope,” and by the end of the day, the rocks were covered in different colors and messages.

“If you painted a rock, when you leave you come and pick one up, so that you will leave with an awesome reminder of this wonderful day,” said Victoria Slagle, education assistant with LAM.

As part of the ceremony, LaGrange Police Chief Lou Dekmar was awarded the Hope Giver of the Year award. A large number of police officers joined Dekmar on stage when he accepted the award.

Both Hall and Tamlin said they believe the event will grow in the years to come and may even help start similar festivals in other communities.

“I always say Sweetland is about community first, so being a community-first venue, any time we are able to partner with nonprofits or businesses in the area that can have a positive impact on the community, we are all for that,” Loveland said. “This thing is only going to grow. The people who are here right now. I have seen multiple people walk out of those tents — the Testimony Tent and the Safe Zone — and tell me they are changed people because of what they experienced in those tents, and that’s what this event is about.”

Cyclists ride through county to raise funds for multi-use…