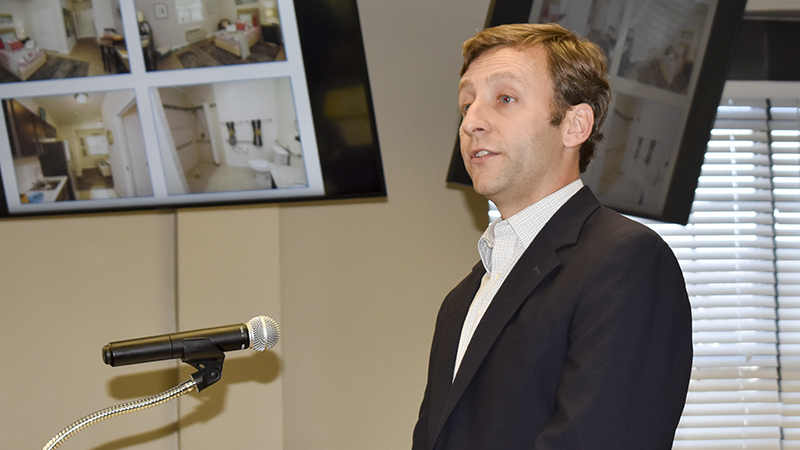 On Tuesday, the LaGrange City Council received comments on a request to rezone property on the still under construction Hills & Dales Farm Road from R-1 (residential) to C-1 (neighborhood commercial) in order to make it possible for a potential developer to build a senior living facility.

The property is currently owned by the Callaway Land Trust, and a representative from the developer said that it plans to purchase the property prior to building the facility.

“Our plan is to build a 72-unit assisted living and memory care facility, along with 12 independent living duplexes,” said Peter Stewart of Shoal Ventures, the applicant. “We have laid out the site plan to have the main facility… at the top of the hill. Our entrance will be off of Hills & Dales Farm Road just north of the new extension. We are building 12 independent living duplexes along Hills & Dales Farm Road and [plan] to have a southern traditional porch facing the street to give nice frontage.”

Stewart said that a market study indicated that assisted living units are needed in the area, as are memory care services. The developer’s management company has 17 similar facilities.

Although the proposed facility will primarily serve as housing, due to the presence of an industrial kitchen serving three meals a day, activity programming and skilled nursing services, it would need to be classified as neighborhood commercial. Vernon Woods and WellStar West Georgia fall under the same zoning designation. However, the change to commercial did raise a few eyebrows among the development’s nearest neighbors.

“My biggest concern would be moving from R-1 to C-1 and what the domino effect might be by moving to C-1,” said Mitch Cummings, a Buckeye Creek resident.

Cummings listed businesses allowed under C-1 zoning that he opposed including pawn shops and group treatment facilities. City Planner Leigh Threadgill said that the apparent zoning disparity between assisted living facilities and businesses like store fronts could be cleaned up in the rewrite of the city’s zoning code, which is currently underway. However, the applicant had told city staff that he wished to move forward, even as the code re-write continues.

Another concern shared in the meeting was for the traffic impact on a road near Vernon Woods and Buckeye Creek, which both include an older population.

Buckeye Creek resident Murray Schine said he worried that too many curb cuts on the road could alter its character from that of the connector it was advertised as to a heavily trafficked, commercial road. He also expressed concern regarding where the entrance to the development would be in relation to Vernon Woods Drive.

“I have no problem with the construction of this or of a limited change in zoning as long as we keep the somewhat farm nature,” Schine said. “It is a beautiful area out there. I would hate to see a lot of construction. The main concern I have now though is the traffic.”

The city had acknowledged that the road was expected to attract housing development, even as it was being planned, but both Threadgill and Mayor Jim Thornton said that the goal is to limit curb cuts on the road to other roads not individual driveways.

Despite the C-1 zoning necessary for the use, both council members and city staff compared the use to multi-family housing developments.

“This is different than a subdivision because it is more like a multi-family — if you want to think about it that way — but there is just one driveway into it,” Threadgill said. “It is going to end out being 96 units, so I agree. That is the plan — to have access control, so to speak, along the roadway with larger developments that would have roads built off [of Hills & Dales Farm Road].”

Thornton said that the age of the residents would also be likely to impact how much traffic the development causes.

“I would assume that an assisted living facility like the one being constructed would have less vehicular traffic than a residential subdivision would,” Thornton said. “I would imagine that a lot of the residents will not be driving. Some will, and they’ll have family coming and all of that, but your point is well taken that the traffic flow needs to be accounted for when the city sights the curb cut.”

Plans for the development, including where the curb cut is located, will need to be approved by the city before the developer can move forward, and Thornton said that city staff will be instructed to be conscientious of sight distance and turn distance when reviewing the proposal as it moves through the process. Thornton also noted that because Hills & Dales Farm Road will be a city road, the city will be able to easily implement additional traffic control devises if they prove necessary.

“If someone had a stroke, their significant other could move in [to a duplex] and continue living a pretty normal life with a garage and a separate entrance, similar to a continuing care, retirement community,” Stewart said.

An objection to the location and visibility of the sign notifying residents of the proposed zoning change was also raised, and Thornton said that while the city is careful to meet requirements for notifications under the law, it could work to share beyond those requirements by sharing information on public hearings through social media and other venues.

The LaGrange City Council will meet again on May 28 at 11 a.m., when it will host its annual work session to discuss the city budget.

Pop-up market to be hosted in West Point this…