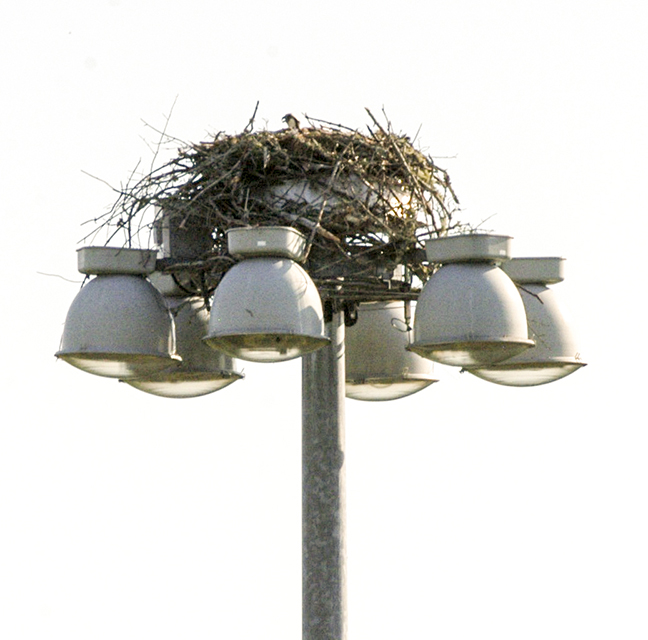 Ospreys have built a huge nest on top of a light pole near the West Point Dam powerhouse. (Wayne Clark | Daily News)

WEST POINT — For several years now, people driving across the top of West Point Dam this time of year can look over into a shallow area of West Point Lake to see a nesting pair of ospreys and their offspring.

On the Alabama side of the West Point Lake, there’s a big nest on a platform that was put there to attract them, and there are usually two or three young ones in that nest this time of year. There’s a double bonus this year for those who love to watch wildlife.

There’s a big nest on each side of the road.

There’s the nest that’s been on the platform for several years now, and there’s a new one, in of all places, on the top of a light pole on the road leading to the powerhouse.

Ben Williams, a park ranger with the West Point Project, said that this is not unusual for ospreys.

“They build in places close to the water,” he said. “We have 21 platforms for them around the lake. They are filled up, and they’re looking for other places to go.”

The only problem with the big nest being on top of the light pole is that sometimes the lights have to be changed.

“When we do that, we lower them,” Williams said. “We could damage the nest doing that.”

Should lights have to be changed, odds are it will probably be after the current nesting season. In late summer, the hatchlings are usually on their own. They will find mates the next year and build a nest in a new location. The nesting pair that builds a nest usually returns to it the next year.

Williams said a pair of ospreys this past year built a big nest on one of the large metal frames that hold power transmission lines not far from the dam. Williams said he’d contacted Georgia Power about it and that a line crew had come out to look at it. Since it wasn’t near the power lines they left it alone.

Williams said that he’d reached out to the U.S. Fish and Wildlife Service to find out if there were any special rules in regard to ospreys. They told him that there are some protections for all migratory birds but that ospreys don’t have the specific kinds of regulations that involve eagles.

Williams said West Point Lake’s eagle population is growing. He said there are up to 12 eagle nests that are being monitored on West Point Project lands.

Sometimes called fish eagles, ospreys are large raptors that can be up to two feet in length and can have a wingspan of close to six feet. They are typically brown on their upper parts and have a grayish head and are gray on the underside. They are excellent flyers and noted for the “cheep-cheep-cheep” sound they make.

When in flight, they can spot fish swimming near the surface from more than 100 feet in the air.

They will hover momentarily before plunging toward their target, hitting the water feet first, grasping the fish and flying back to the nest.