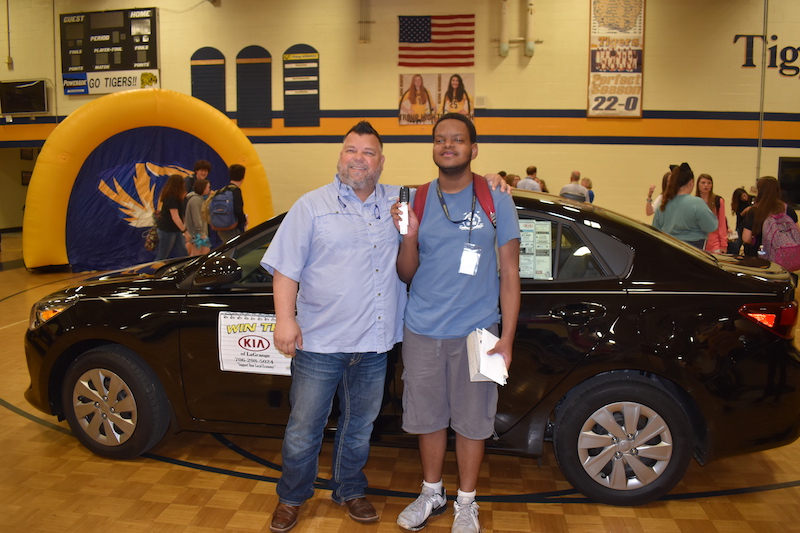 This year, Troup High School students made thousands of small efforts to make sure they qualified to win a new car, including getting to class on time, maintaining good behavior and bringing their lanyards. However, for this year’s winner, senior Nikkolas Williams, the most important part was the only one that he missed last year — turning in his entry.

“I remembered to give them that yellow slip, because I think that is why they didn’t call me last year,” Williams said after winning.

Remembering that last step paid off big for Williams on Friday when he won a new Kia Rio from Kia of LaGrange. The car could prove useful to the senior, who plans to attend LaGrange College next year and hopes to become a veterinarian.

Troup High Principal Niki Watts said that she couldn’t have asked for a harder working, politer and more consistently on-time student to win than Williams. However, Williams had stiff competition in the drawing, with students working throughout the year to make sure they were eligible to win the Kia Rio.

“It is a huge motivator,” Watts said. “We encourage our kids to show up every day and do the right thing and work hard, and being able to put a brand-new vehicle on a pedestal as a potential reward for that is a huge motivator for our kids. There is a lot of excitement. We appreciate Mr. and Mrs. Liechey and the folks at Kia of LaGrange so much for everything they do for us and for our kids.”

Other students won prizes, including pizza for a year from Marcos and various cash prizes. Watts said the car was what drew the most attention, however.

“For two years in a row, this has been the talk of the school year among the students,” Watts said. “We had it displayed prominently out front at our flag pole, and it was something that they took a look at every day coming in. So, we wanted to make sure they had a daily reminder of what potentially could be gained from meeting expectations.”

This is the second year that Kia of LaGrange has partnered with Troup High School for the giveaway, and for the local dealership, it is all about supporting education and the local economy.

“We believe in education. We think that is important not only to our county and our city that we live in, but our country,” said Todd Parrish, general manager at Kia of LaGrange. “To be able to be part of this and to put some type of incentive like a brand-new car and then for kids to come out and continue to get better grades, continue to get to school and be on time and that kind of stuff, that is amazing.”

Even as students filed out of the gymnasium after the giveaway, Watts said that she expects that many of the underclassmen who didn’t win are already looking at ways to improve their chances next year.

“I guarantee you the kids who qualified today that maybe didn’t hear their name called for one of the prizes, they’ll already be hoping and planning that next year they get another opportunity,” Watts said. “It’s something that motivates the kids, and it is a great incentive, especially for our students that maybe are economically disadvantaged or have some financial hardship. This is not just a gift card or a free dinner. You are talking about a life-changing prize here, so we are really, really excited for our students and know it is going to continue to motivate them.”

New superintendent makes trip to Troup County ahead of…