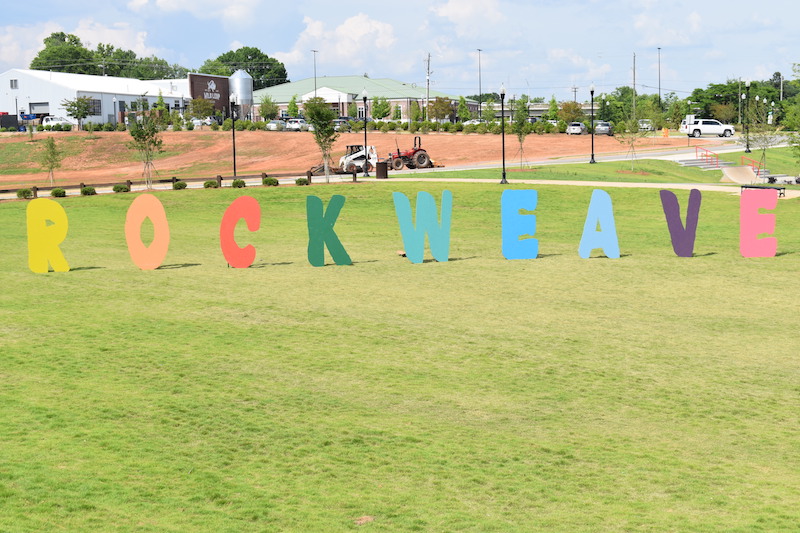 The Downtown LaGrange Development Authority, in partnership with Wild Leap Brew Co., Sweetland Ampitheatre, the Callaway Foundation, the LaGrange City Council, the Troup County School System and Kia Motors Manufacturing Georgia formally revealed the name of the upcoming two-day music festival that will take place throughout LaGrange in October. The festival, titled ‘Rockweave’ is expected to bring in 20+ artists and 9,000+ patrons over a two-day period from Oct 4-5, and a portion of the proceeds will go to benefit the TCSS arts’ programs.

“While working on some shows at Wild Leap, the idea was formed to create something much bigger,” Wild Leap Brew Co. co-founder Rob Goldstein said during the reveal. “When considering ways to give back to the community as a part of this festival, we learned of the numerous budget cuts that the music and arts programs have faced here in the Troup County Schools. All of us have experienced the power of art in our own lives, and we are incredibly proud to announce that a portion of all ticket sales and hotel room sales from the festival will go directly to benefit music and arts programs here in the Troup County Schools.”

The idea for a music festival has taken into consideration the history of LaGrange and Troup County’s textile mills. The name ‘Rockweave’ is meant to evoke a reflection of the music festival that will come to the city, but also to pay homage to the city’s past.

“As the idea for the music and arts festival evolved, we always knew it would stand for more than just the music, we wanted to determine what the arts portion of the festival would really be,” Sweetland Executive Director Keyal Loveland said. “At the height of the textile boom in Troup County, the Hillside Cotton Mills were born under Ethel Callaway. Several mills were incorporated in the years to come, but the name of one mill in particular sang out to us.”

That name was Rockweave. Hence, the name for the Rockweave Music and Arts Festival was born.

Callaway Foundation President Tripp Penn spoke on behalf of the foundation, relaying his hopes and excitement for the festival.

“We’ve been really fortunate, in years past, to be part of many events and activities meant to rally this community and bring people together,” said Penn. “We full believe that Rockweave is going to be another fun and transformative event that brings together thousands of people from across the Southeast.”

Interim TCSS Superintendent Roy Nichols spoke of how, when first approached about the idea of the music festival, he thought the vision was grandiose, but was in support of the idea of providing funding to the schools’ arts programs.

“I said, ‘I’m having trouble imagining what you’re talking about, but if it’s going to benefit the arts in the school system, I’m all for it,’” Nichols said. “

City Councilman Jim Arrington and DLDA Executive Director spoke as well, lending their support for the upcoming music festival. Artists participating in the festival will be revealed in the coming weeks, and tickets will be available for purchase soon at Rockweave.com.