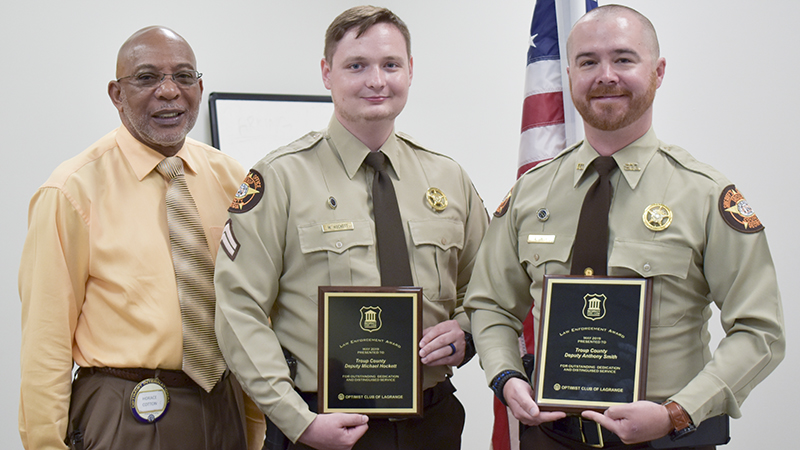 The annual recognition ceremony is the Optimist Club of LaGrange’s way to say thank you to local first responders, and both TCFD Chief Dennis Knight and TCSO Sheriff James Woodruff thanked the club for honoring first responders. However, the recognition ceremony was different than previous years in that two deputies were recognized for responding to a call where they were able to save a man’s life.

“This year we recognized two officers from the sheriff’s office, which is a little different,” said Horace Cotton of the Optimist Club of LaGrange.

Brown and Hockett have previously been recognized by the American Red Cross and the Troup County Board of Commissioners for saving the life of a citizen having a heart attack on Thanksgiving. Woodruff said that it is meaningful to see them recognized by the Optimist Club as well.

“I want to thank the Optimist Club for year after year honoring both firemen and outstanding law enforcement officers for their acts of heroism,” Woodruff said. “How blessed I am to work alongside such fine young men who because of their heroic efforts and them being in the right place at the right time. This man survived, and — like his wife said — he would have died if they had not gotten there as fast as they did.  So, I just want to thank them for their professional job they do, the sacrifices they make and the sacrifices their family makes in order to allow them to do their jobs for us.”

Woodruff also spoke on the bravery of every officer coming into work following officer related shootings across the state and region, including an Auburn police officer who was killed on Sunday.

Hockett was wounded in 2017, when he was shot during a standoff and his family was glad to see him honored on Monday.

“There are so many people who point out what they do wrong,” said Jessica Hockett, Michael Hockett’s wife. “It’s awesome to see [them honored].”

The recognition was also meaningful to Smith’s mother, who said she worried for local officers when they are on duty.

“For me as a parent, it is just something that we think about all of the time,” said Belinda Rhodenizer, Smith’s mother. “It is always in the back of our minds, if our boys are safe and what they are doing out there. We pray a lot, and for something good to come out of it and for us to be able to experience it and for our community to recognize these boys for the great things that they do on a daily basis that the public eye and the media doesn’t highlight — we need more of that.”

Rhodenizer said that young boys need to be able to see the daily accomplishments of law enforcement.

Meanwhile, Brown was recognized for his hard work at the TCFD day-in and day-out.

Knight said that Brown works hard to be the best firefighter he can be.

“He has got a desire to be the best that he could possibly be,” Knight said. “He recently obtained certification as a Georgia smoke diver. It is one of his most recent accomplishments. It has a very difficult course.”

Brown is a certified firefighter, who is EMT certified and a GEMA specialist. According to Knight, Brown has attended numerous training opportunities.

The Optimist Club of LaGrange also held a drawing for a Triad lawnmower. The club sold 765 raffle tickets, with proceeds to benefit Troup County children.

No serious injuries in boat fire