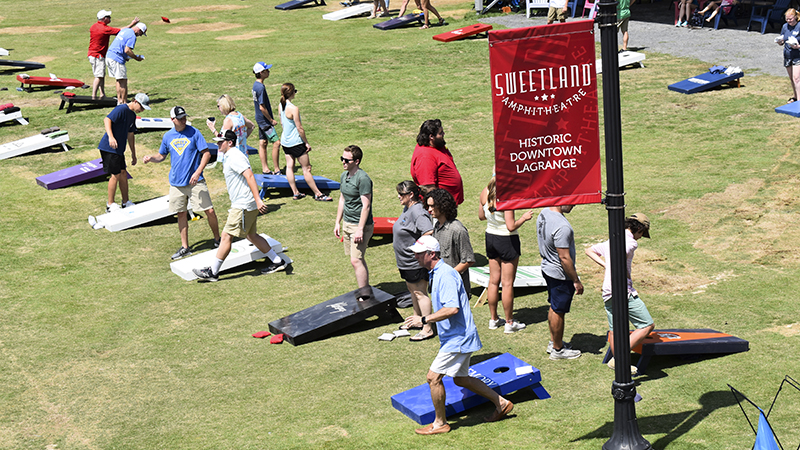 Young Life LaGrange held its sixth annual cornhole tournament on Sunday afternoon at Sweetland Ampitheatre, which drew a crowd of approximately 200 and saw more than 40 teams take part. The tournament, which moved to Sweetland’s facility in 2017 after a three-year run at the Callaway Memorial Tower, has become a staple of early summer in LaGrange as well as a revenue stream for the organization.

“Our original intent was to create a family-friendly fundraiser where people could bring their family,” said Young Life LaGrange Director Allen Crawford. “With fundraisers like four-man golf scrambles, you generally see the same people, and they’re not set up for families. This allows dads to play with their kids and for everyone to hang out together. We wanted it to be an inclusive and community-friendly event that people could get behind. We started with 15-20 teams, now we’re around 40 teams.”

Young Life is a national outreach ministry that seeks to engage middle and high school students, walking alongside them throughout their adolescent years and modeling a Christian lifestyle. Locally, there are Young Life programs at Troup High and LaGrange High School, as well as a middle school program called Wyldlife.

The event was not originally designed to offset the majority, or even a significant portion, of the organization’s operating costs, but has grown significantly since its inception and has become an event the community looks forward to each spring.

Young Life LaGrange raised more than $11,000 from the cornhole tournament this year. The majority of the money raised for the tournament comes through sponsorships, of which there were 35 this year.