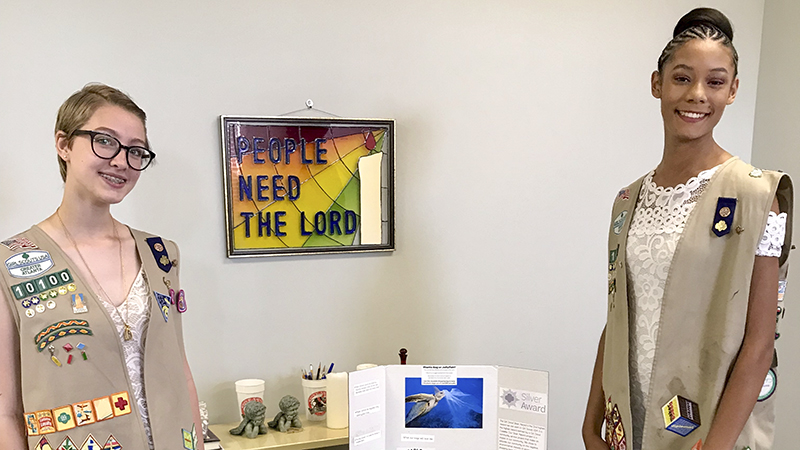 Since LaGrange High School freshmen Peyton Eley and A’mijya Dudley began participating in Girl Scouts with Troop 10100 a decade ago, they have been brainstorming about the topic they wanted to address for their Silver Award Project.

The Silver Award is the second highest award given by the Girl Scouts of the USA, and this year, Eley and Dudley were recipients of it for tackling the issue of single-use plastic shopping bags. They were honored for being Girl Scout Cadettes, who are recognized for finding a way to create a positive change in their towns.

“You just pretty much do something you think is important to help your community,” Dudley said about the Silver Award.

The girls were shocked to learn that 8 million tons of plastic gets dumped into the ocean every year. They read news articles about fish, whales and dolphins who died at young ages as a result of ingesting an excess amount of plastic. That was the main reason why they chose the harmful effect of plastic bags to be the focus of their project.

“We want to help save the turtles and other animals in the ocean,” Eley said.

“Since plastic is all over our oceans, they eat the plastic because they think it’s something else. They either die after it gets into their system, or we eat them.”

Eley added that the problem has become so severe that there is currently a massive mound of plastic in the middle of the ocean.

“It’s like its own island because there’s so much,” she said.

Another reason the girls felt compelled to focus on this issue was the fact that it also affects people, too. Seventy percent of the oxygen that humans breathe comes from the ocean, so anything that is harmful to the ocean can also be harmful to human life.

The first thing Eley and Dudley decided to do for their “Reusable Bags Save Lives,” project was to design reusable shopping bags to give away to members of the LaGrange community. They hoped that people would opt to use their reusable bags rather than the plastic bags that are harming the environment.

To bring awareness to the LaGrange community about this issue, Eley and Dudley set up a table outside of Kroger with an informational tri-fold board.

“We had pamphlets and business cards, and we gave away reusable bags to people,” Dudley said.

Most people were eager to take a bag, and a couple of weeks later, Eley even saw someone using their reusable bag in a store.

The girls were honored when they received the Silver Award. They both feel that service is their favorite part of Girl Scouts and a big part of the reason why they have continued to be active members through the years.

“It’s fun to do the community service and help other people,” Eley said.

Eley and Dudley want to encourage people in the LaGrange community and beyond to be mindful of the effect that single-use plastic bags have on the environment. They hope that their project has persuaded more people to begin using reusable shopping bags in order to help keep the environment safe for all forms of life.