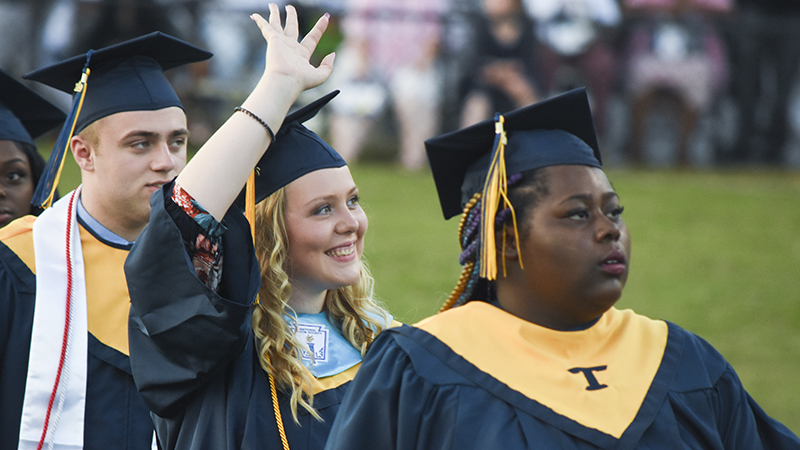 Students were reminded by their peers of the good times they had at Troup High, but they were also challenged to look toward the future.

“Each and every one of you has a chance to change the world,”said 2019 STAR Student Neil Patel. “Be phenomenal or be forgotten.”

Salutatorian Caroline Blanks reminded her classmates of what they learned during their time in high school and encouraged them to soak up the memories.

“We have learned about math, science, social studies and English, but most importantly we’ve learned to take chances, to fight for those who don’t fight for themselves and to have no regrets,” Blanks said.

Blanks said regardless of their future paths, students will always have all the memories from their four years together.

“Though you may never see the person sitting beside you again, you always will remember the chants you have yelled, the hugs and the tears you have shed and the smiles you have exchanged,” she said.

Valedictorian Anna Murphy ended her speech by looking forward to the future, which is truly wide open for the newly graduated Tigers.

“Today marks a point in our lives where we become the first pencil marks on our own unsolved equation,” Murphy said.

“There is no such thing as individual success. It doesn’t exist,” Watts said of Summitt’s teachings. “No one accomplishes any great feat without the influence and support of the people in their lives. You win in life with people.”

Watts also shared a few words of knowledge she learned from Dennis “Chip” Medders, who served as principal at Troup High for three of the four years the class of 2019 was in high school. She said she will always remember when Medders asked someone, “If I have to do it, then what do I need you for?”

“Don’t just talk the talk, walk the walk as well,” Watts said. “Make sure you exemplify the expectations that you have for others … Lead by example and build your own army of supporters that will go into battle with you, without hesitation, as you work toward your goals.”