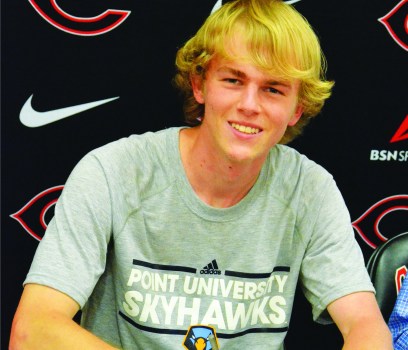 It was a busy spring for Callaway High’s Ian Dougherty.

Dougherty was a member of Callaway’s successful track-and-field team, and he also helped the boys’ soccer team make it to the state tournament.

“It was his senior year, and he didn’t want to do one or the other,” said Melissa McDonald, Callaway’s track coach. “I got together (with soccer coach Mike Petite) and decided that it was important for him to do as much as he wanted to.”

Dougherty will narrow his focus a bit this fall when he begins his athletic career at Point University.

Dougherty has signed a letter of intent to join the Point cross-country and track-and-field teams.

Dougherty will compete in the distance events, which were his specialty at Callaway.

“Ian was a cross-country runner who was interested in track,” McDonald said. “One of the first things he said to me was, you know I run cross country, I hope you don’t expect me to be as fast as the sprinters.

“I explained to him that I wanted him to continue to do what he’s done in cross country, that’s to stay committed to himself and to getting better every time he comes out, every time he races.”

McDonald added that “every time Ian has raced, whether it’s cross country or track, he has reached a personal record. He gets better and better, and that carries over to his personal life.”

McDonald is glad to be able to see Dougherty get a chance to run on the college level.

“For him to stand here to sign a scholarship to compete in NAIA cross country and track and field is a testament on being the master of his own fate,” McDonald said. “He worked hard.”