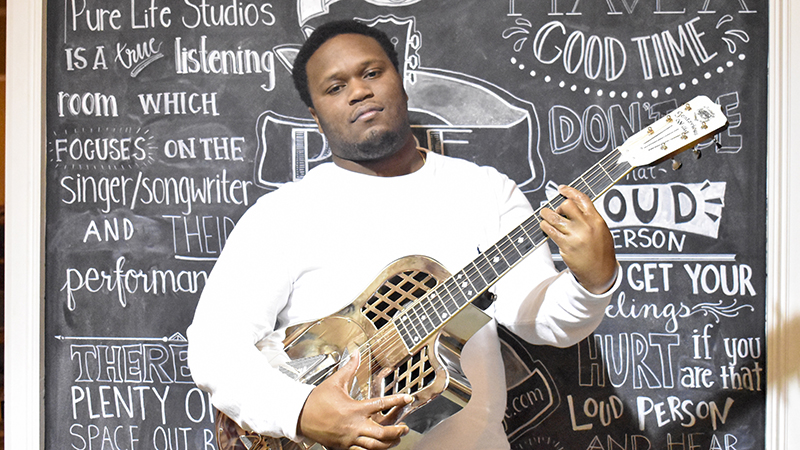 Jontavious Willis poses for a picture last year. Willis has been touring the west coast and plans to head out on tour again shortly. --File Photo

“It has been great and fun to explore another city and experience the cities as well,” Willis said. “I started in Oregon, then California, and now I am currently in Arizona. The cities have been all great.”

On May 18, Willis graduated from Columbus State University with a degree in sociology, but while his fellow classmates were walking across stage receiving their diplomas, Willis was on a different stage, performing halfway across the country.

“I did not make it to my graduation, but I still wore a cap and gown on stage while performing,” Willis said.

“I celebrated my 23rd birthday and graduated from college all while on this tour.”

In 2017, Willis went on his first tour, opening for Taj Mahal and Keb’ Mo’ and has seen his he audience grown tremendously since.

“My favorite part of all of this is the audience and being exposed to all of them,” Willis said. “I went on my first solo tour in February, and it is all still really fun. I am opening for very established artists now. The sizes of towns and such were small [at first], but now it is all a lot more.”

Now, a college graduate and full-time musician, Willis said he has more time to explore and go abroad.

“You know, there were some weeks where I was playing on stage in New York City on a Monday and then class on Tuesday,” Willis explained.

“I am going to have more time on my hands and can finally explore and do the things that interest me.”

Willis has returned home and plans to take two weeks at home before going back on tour again.