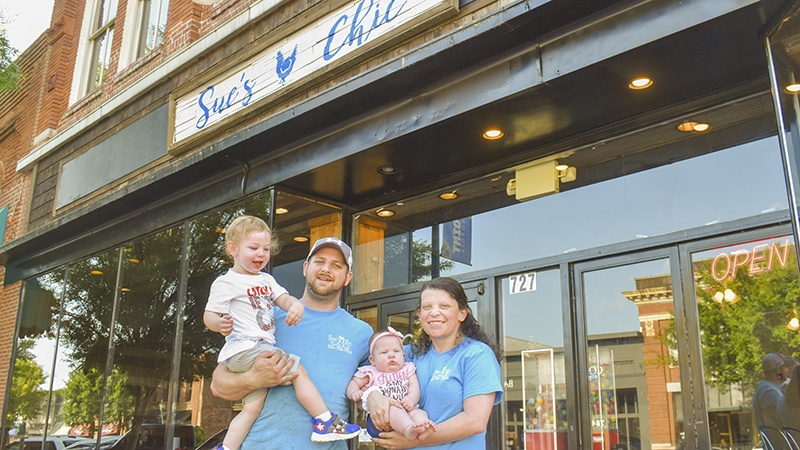 Sue’s Chic owners Robert and Jessica Cox, along with their two-year-old Mason, left and 6-month-old daughter Aubriella stand in front of the restaurant they opened about three weeks ago in West Point. (Dustin Duncan | Daily News)

Since opening at the beginning of May, the new location of Sue’s Chic in West Point is steadily serving breakfast, lunch and dinner.

“We closed down the one in Valley (Alabama), and consolidated it to this one,” said restaurant owner Robert Cox. “In order for us to expand and make it something else, we took it and made a new concept in a different city. No building in the Valley could sustain what we wanted to do.”

Cox was eating across the street with his wife, Jessica, and noticed the neighboring building for sale and called about it.

“This is such a bigger space, and we can do a lot more out of it,” Cox said.

“Upstairs we can host events, wedding receptions or parties and eventually we will move to beer and wine, as well.”

For more than 40-years Sue’s Chic has been serving its southern comfort food and when Cox bought the restaurant, he wanted to continue the name and tradition of the food. Cox grew up in the food industry, is a trained chef from LaGrange, so when it came time for him to relocate Sue’s he said it was a homecoming for him.

“I have always worked in and out of the kitchen growing up,” Cox said. “Being from LaGrange and graduating from LaGrange High School, this was a big deal to me. People know the name [of the restaurant] and everyone is familiar with it too. Business has been good since we have moved here, and we still see old faces with some new ones, as well.”

The main goal for Sue’s Chic is for it to be family oriented and expand much more, according to Cox.

“We want it to be bigger than anyone ever thought it to be,” Cox said. “You never know, you may wake up, and there is a Sue’s Chic on every corner. Everybody starts with one and makes more.”

Jessica said that even when it came to the adversity of opening up a new location, she never had her hesitations.

“I supported him fully and told him to go with it even when he was having doubts,” Jessica said. “We are so thankful for God and all the blessing he has given us.”