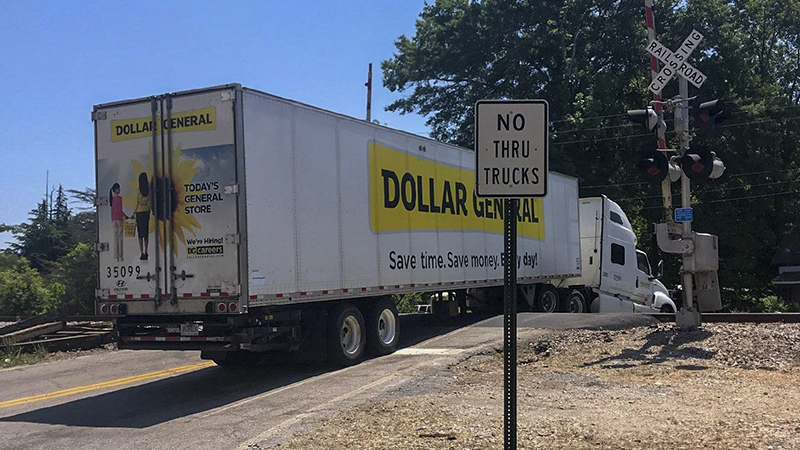 Within two days of one another, two 18-wheelers have kept trucking after seeing “No Truck” signs at the railroad crossing at Johnson Street in Hogansville, according to City Manager David Milliron.

The trucks have gotten stuck, forcing road closures and delays for CSX trains.

“We just got that crossing repaired and opened too,” Milliron said. “It is hard to say (why) because truckers use commercial GPS systems that are specific for truck routes. There was absolutely no rhyme or reason for these.”

Milliron said that the City of Hogansville has worked with the Department of Transportation to put extra signage in the area.

“The trucker has even admitted that he saw the signs,” Milliron said. “At some point, someone will get hit. This is a huge concern to us because these trains have to move and to stop trains is very costly. And we do not want a truck getting hit on a crossing. This is a huge safety issue and causes traffic jam ups.”

The city posts on its Facebook page every time a truck gets stuck,  and Milliron said they are even trying to get creative to put the word out. On Wednesday, the city posted pictures of the signs and truck along with the caption, “I saw the sign and it opened up my eyes, I saw the sign.”

“We have even met with CSX and have been taking every opportunity to try and get the message loud and clear. Taking the creative approach, I think it is getting the message out there.”

When the trucks have gotten stuck both times, it has caused a road closure that lasted over an hour. Both drivers received citations from the city and CSX.