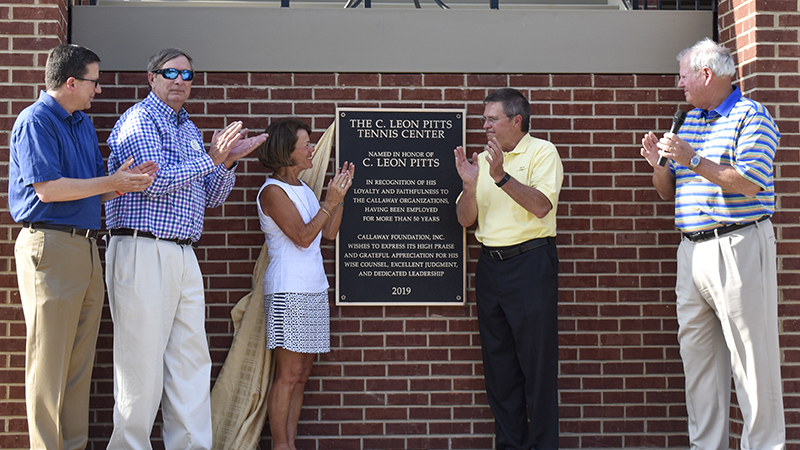 On Thursday, local tennis fans celebrated the grand opening and dedication of the C. Leon Pitts Tennis Center at the Ann and Doc McCluskey Tennis Complex.

“Leon was an avid tennis player,” said Speer Burdette, former president of the Callaway Foundation. “He was a fan, and he was a lifetime friend and tennis buddy of Doc McCluskey, so how appropriate that this tennis complex and this beautiful new tennis center be named in their memory. For over 54 years, he served with Mr. Callaway and his related interests. In fact, Leon is one of only a few people — including Mr. Callaway himself — who ever received a 50-year service pin from the Callaway Foundation.”

Friends, family and former co-workers recalled Pitts’ time on the tennis courts during his life during the ceremony fondly — including his later years, when he became an observer.

“When he couldn’t play tennis anymore with the Tuesday night game, he became the tennis watcher, and that is how I remember him,” said Dr. Chuck Pitts, Leon Pitts’ son. “I remember him the most watching me play in junior high school, and then watching Joey and I play doubles.”

In addition to his love for tennis and his service with the Callaway Foundation, Pitts was also chosen due to the strength of his character, according to speakers.

“This project is particularly special to those members of the Callaway Foundation who have been here for a while, who had the opportunity to serve alongside Mr. Leon Pitts,” Callaway Foundation Tripp Penn said. “When you name a building or you do something this permanent, this important, you have to make sure that the individual being honored had the character and the type of lasting impact to stand the test of time. That is certainly the case with Mr. Pitts.”

The facility received extensive interior and exterior upgrades, including a full remodel of the pro shop building, asphalt court renovations and lighting upgrades. The project was funded with a joint effort from Special Purpose Local Option Sales Tax funds, a renovation grant donated by the Callaway Foundation and fundraising efforts from the Chattahoochee Area Tennis Association. The Troup County Board of Commissioners collaborated with Principle-Williams Construction of LaGrange and Smith Design Group to complete the renovations that were completed this month.

“My job was basically to raise $100,000 for this project, and the tennis community end up raising over $150,000,” said Anita Holle, who led CVTA fundraising efforts for the project.

The Volley for the Veranda event in April 2018 raised a large portion of the funds, and a variety of donors contributed to the center.

The C. Leon Pitts Tennis Center at the Ann and Doc McCluskey Tennis Complex is located at 100 Hunnicutt Place in LaGrange.