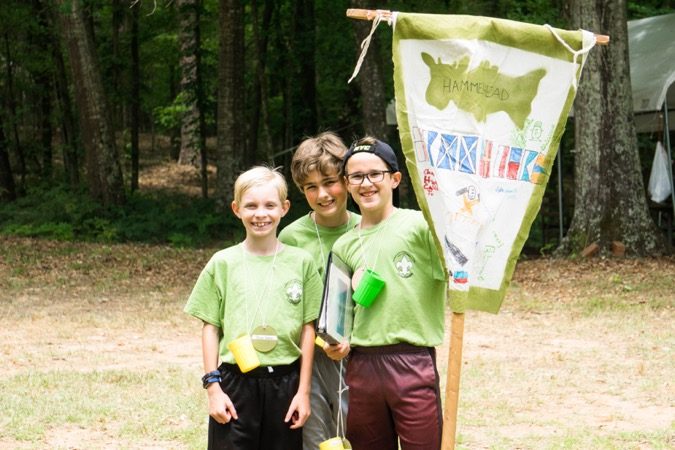 The 41st annual Camp Cowpie, a cub scout day-camp, is currently in full swing for scouts at the Evans Farm.

This year the camp is working off the national theme of “Under the Sea,” with their own interpretation. And just like every other year, it’s being led by camp director Martha Evans.

“Since we were so close to the lake, we chose the manatee as the mascot, the cow of the sea, because she’s freshwater and saltwater,” Evans said. “They are learning scout activities like building a boat that they will race in the rain gutters.”

Each individual team of the scouts is named after a fish theme, and for the first time in Camp Cowpie history, the camp also has an official group of girls.

The scouts are spending the week immersed in the great outdoors and fulfilling requirements for badges.

“Most of the badges are about water,” Evans said. “The shape of the property is in the shape of a cow head. They are studying a lot about our lakes and how to protect it. They are going to carve a fish on a stick, and we will go out on an hour and a half hike by the lake and pick up litter along the way.”

Evans said that the leaders are learning just as much as the campers.

“The younger scouts’ leaders-in-training emphasize a little more because they just got out of that younger phase,” Evans said. “They too are learning responsibility.”

Evans said that the main goal is that they are out having fun while learning about nature.

“We split them all up and make them essentially make new friends,” Evans said. “We give out a big plywood cow as a prize too. They are out in the woods collecting insects and being in the outdoors. This is a big movement I strongly believe in. Unlike other camps our director and camp never change. We have been in this location for 38 years and our staff has regulars each year. We all do this together.”

Market on Main opened Saturday with fresh produce, other…