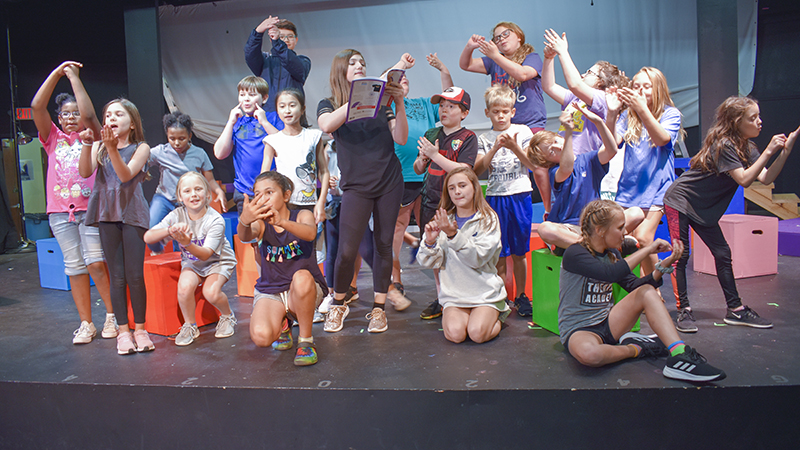 The Lafayette Theatre Academy acts out a scene from Junie B. Jones during practice earlier this week. The musical opens on Friday, June 14. --Grace Braswell

The Lafayette Theatre Academy will perform “Junie B. Jones the Musical” on June 14-15, as the capstone of a two-week theater camp for children.

The show and camp feature about 30 kids ranging in age and grade level, from rising second graders to rising eighth graders. During the camp, the students work from 10 a.m. to 4 p.m. doing a variety of activities to prepare them for their showcase.

Valarie Longshore-Sargent is the director of Junie B. along with 16 “big kids,” half of who had been through the program themselves.

“The set-up of a day at camp is like a school day,” Longshore-Sargent said.

“The kids go through a routine. They do choreography, run through music, eat lunch, play some games and do more choreography after that.”

Lily Boyd, a 13-year-old rising eighth grader, plays Junie B. in the show. Boyd said that Junie B. is her favorite role that she has played so far, and she has been in 11 productions.

“It is exciting but also very stressful to remember everything,” Boyd said. “Mrs. Val and the big kids are very nice and very helpful. They help us to learn our choreography and keep everyone together.”

Longshore-Sargent said that “Junie B. Jones the Musical” is a story about a young girl growing up, starting first grade and getting into trouble, which is something that most kids can relate to. Junie B has universal messages that aren’t only for kids but something everyone can learn from.

“Not only is doing shows about being on stage and performing, but also about trying hard, learning teamwork and having empathy for one another,” Longshore-Sargent said. “Theater teaches kids to be in someone else’s shoes, which shows these kids how to be better people and to grow into better adults.”

The musical will premier at the black box theatre Friday, June 14 and Saturday, June 15 at 4 p.m. and 7 p.m. Tickets are $7 general admission.