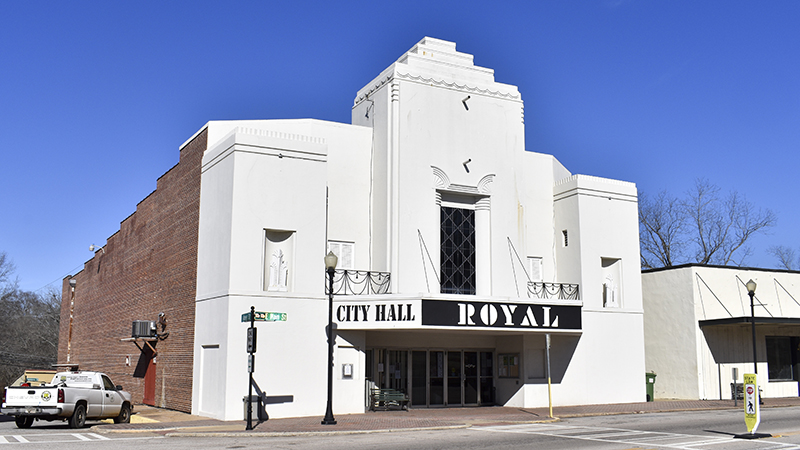 HOGANSVILLE — The city of Hogansville announced Tuesday that it has received a $200,000 Rural Business Development Grant from the U.S. Department of Agriculture that will go toward the restoration and renovation of the Royal Theatre, which is currently being used as city hall.

The funding received so far includes $1,116 from the Federal Emergency Management Agency to repair the marquee, a $29,125 grant from the Fox Theatre Institute to pay for half the cost of the theatre’s master plan, a Fox Theatre grant for $51,250 to pay for architecture plans and specifications for building rehabilitation, a $20,000 grant from the U.S. Department of the Interior’s National Park Service for roof replacement and a $2,750 grant from the Hogansville Historical Society.

The Georgia Department of Transportation has also provided a Multimodal Safety and Access Project Grant for $33,180 that will go toward crosswalks between the theater and Highway 54.

“The project itself is going to cost $1.8 to $2.2 million, and we are definitely making headway,” Milliron said. “This has been a great thing because the community has been so supportive.”

With the Rural Business Development Grant, the city has $1,237,421 total in grant money to use for the theatre. The newly-received USDA grant, and its matching share will be used to remove all non-historic, non-salvageable elements, stabilize the theater building and reconstruct interior and exterior windows and doors.

When the renovations are complete, the theater will operate as a multi-purpose performing arts theatre.  Milliron said the theater renovation will create an estimated 75 jobs.

“The actual total of uses will be a lot more than what it was first built for,” Milliron said. “This will be the biggest catalyst for economic development for the revitalizing of Hogansville.”

The city hopes to eventually move city hall to the PNC Bank building, which was purchased by the Hogansville Charitable Trust in June 2018. The Royal Theatre has served as Hogansville’s city hall since 1984.