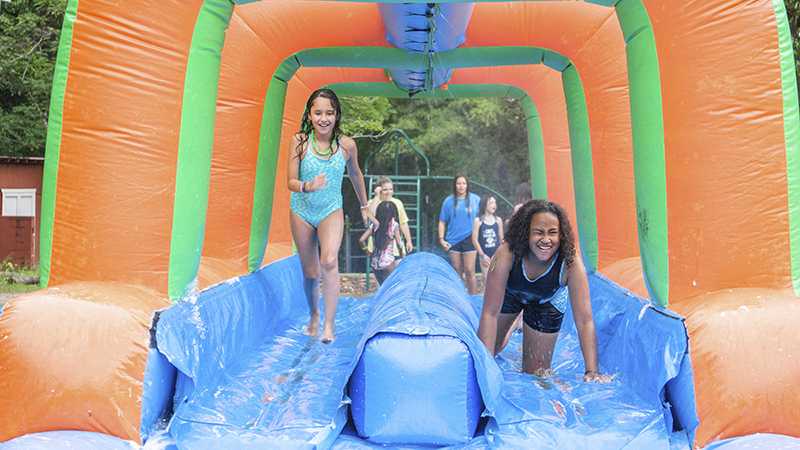 Week two of Camp Viola is in full swing this week while campers spend their last full day playing water games, in the pool and sliding down the inflatable water slide. --Jenna Oden

Each week, a few miles outside of LaGrange, a new group of kids from the community is spending a week at Camp Viola.

The camp is geared toward children and youth who are typically not able to afford summer camps due to economic limitations.

“We are the second week and second group to come out so far this summer,” week two director Kevin Stringham said. “The whole idea is to have a Christian-based camp for kids for the summer. We have all the regular summer camp stuff you would expect, with a Bible story rotation every day.”

This week Fountain Church and Lafayette Christian School are the sponsors for rising fourth to sixth graders at Hogansville Elementary.

“This year they are learning about the life of Joseph and how his brothers treated him poorly, but Joseph forgave them,” Stringham said. “We do a chapel service every night too.”

Stringham has worked at the camp for nearly two decades while his assistant director, Charity Pike, is in his 20th year volunteering.

“This has been a fantastic week of campers,” Stringham said. “I don’t know if there has ever been a year where I have not had to have a serious talking with someone. This year, I have had no serious discipline problems.”

The two said that the camp is also a module for middle school volunteers to learn leadership and responsibility.

“They are with them all the time, just pouring into them,” Stringham said. “I love this because both of them (middle school and high school volunteers) have taken time off of work and really count this as a mission trip, just 20 minutes from home.”

Pike came to camp the first time when she was 9-years-old.

“We do these camps for low-income families,” Pike said. “Every summer after my first one I came back as a middle schooler, then a counselor and now. Some of these kids, even down to the food they get, do not get this at home. Pouring into these kids and loving on them is some of the most important things we can do this week.”

Forty campers this week are creating bonds with one another, learning about the gospel and building strong relationships, according to Pike.

“Just being a friend to them (campers), someone to listen to them. We have heard things that you couldn’t even imagine,” Pike said. “We are here to serve them this week and help through all of that. The relationships are huge.”