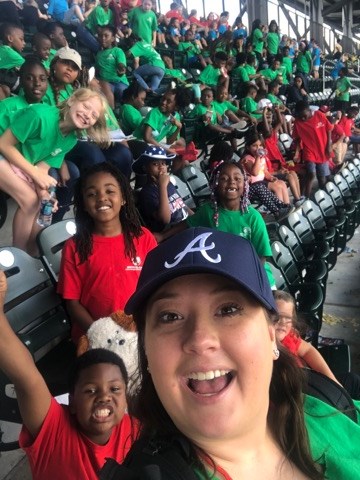 Ashlyn Medlin and summer campers from the Boys & Girls Club of West Georgia smile for a picture at Suntrust Park on Thursday. (Contributed)

On Thursday, 88 campers from the Boys & Girls Club of LaGrange summer program got an up-close look at America’s pastime, when the group’s summer camp went to a Braves game in Atlanta.

The Boys & Girls Club of LaGrange hosts the camp for local children throughout the summer, with support from the community, and Thursday’s trip was something on the wish lists of many students and parents.

“This is part of our summer program, and actually prior to the summer program — probably a month ago — we did some surveys with parents, who would come pick up their kids at the club sites,” said Kevin Cain, the president and CEO of the local chapter of the Boys & Girls Club. “That seemed to be a very popular request, to go to a Braves game. A lot of these kids have never been out of Troup County, much less gone to a Braves game. We just felt like it would be a great experience for them to be able to get on a big bus and go to a big city and see a professional baseball game.”

Because it was the first time out of the county, leaders from the Boys & Girls Club hoped the experience would provide a chance to see what the world is like outside of Troup County.

“I think it provides an opportunity for them to see that the world is a pretty big place,” Cain said. “Sometimes we find ourselves feeling as though the place that you live is everything that there is to offer. Hopefully this is going to provide them an opportunity to see other things, to meet other people and broaden their horizons a little bit.”

Cain said that volunteers made it possible for there to be plenty of chaperones as the kids rooted for the home team, and local churches also played an important role in making the trip possible. City of Light Church offered to allow the Boys & Girls Club to use a bus to take the campers to the Braves game, but when the bus had technical difficulties just before the trip, several local churches joined forces to help pay for a charter bus to take the children to the game.

“We ended up having a charter bus, and some of the local churches are going to fund that for us,” Cain said. “So, it was just an incredible response to a situation that developed Monday of this week.”

Cain said that he was thankful to all of the churches for their response, especially City of Light Church. The Boys & Girls Club relies heavily on community support to make programs for local children possible.

“We can have support in a variety of ways — either through volunteer support, financial support,” Cain said. “All of our funding comes through either contributions or grants or membership fees and special events. Unfortunately, there isn’t a Boys & Girls Club money tree, so we rely very much on the community for their support.”

Cain said that community support is felt by the children at the Boys & Girls Club, especially when volunteers take time to work with students.

“It certainly shows them that the community cares for them, and that is probably the most important thing,” Cain said. “A lot of these kids are very, very young and the true appreciation is not there yet, but for the older ones, it certainly is, especially when some of the support comes through… chaperons. They can see it, and so hopefully they will realize sooner rather than later that the community does care for these kids.”

Cain said that the Boys & Girls Club also plans to treat campers to movies and a trip to the Georgia Aquarium this summer.