Karvelas set to open pizza location in LaGrange this month 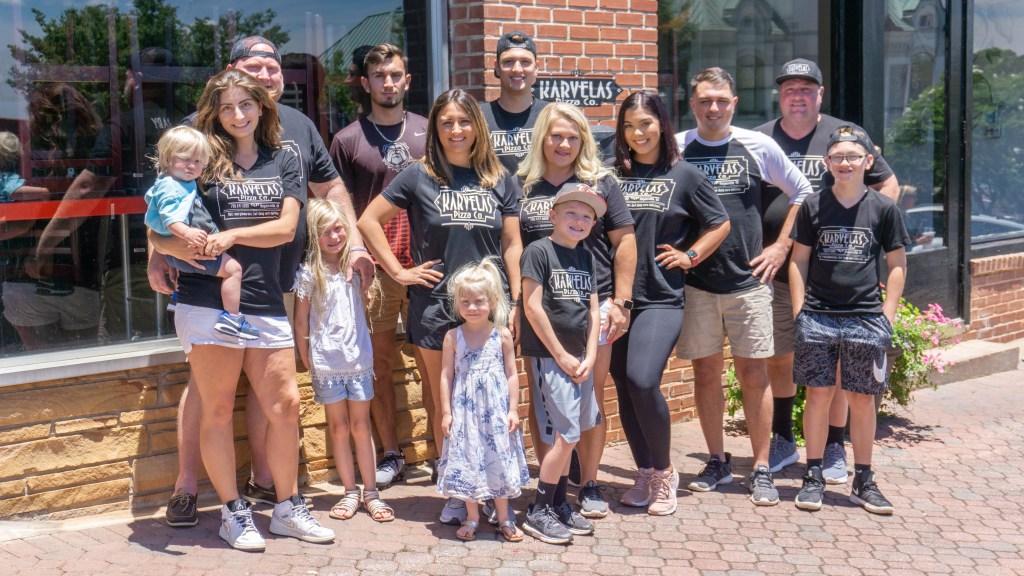 The Karvelas owners and their families stand in front of their new location where they have been working for the past three months to prepare for its opening. (JENNA ODEN | Daily News)

Karvelas Pizza Company is getting ready to open its new location in LaGrange.

The new location will be located at 101 Lafayette Parkway, where Mighty Joe’s Pizza served customers for 12 years before closing in March. Karvelas also moved its location in Hogansville in 2018, so this will be the business’ second new location in a year’s time.

“When we opened the restaurant in Hogansville in 2014, we were a little hidden place,” co-owner Joey Karvelas said. “It was not supposed to get this big, but LaGrange showed us so much love, and [people] would get so excited when they came to eat. After our grand opening at the new location [in 2018], we immediately started talking about this one.”

For the past three months, the Karvelas family and staff have spent their days preparing the new location for its opening next week.

“We did a complete overhaul three months ago when we moved into the building,” co-owner Manny Karvelas said. “We have updated the kitchen completely and added the Karvelas touch. It’s ‘Karvelas Classy.’”

Not only is Karvelas adding new pizzas and sandwiches to the menu, specific for the LaGrange location, but the two brothers added Nick Karvelas as another owner.

“It is an exciting and comforting feeling to open a new location with my brother and son (Nick),” Manny said. “At the end of the day, we could not do it without Nick. He is going to carry us deep into the future.”

Joey said that he expects big things out of Nick because of his go-getter attitude, willingness to work hard and always upholding loyalty to the family business.

“It’s a crazy feeling that they had so much faith in me,” Nick said. “Both are seasoned and accomplished, and I am just this young guy with not much on my resume. It spoke volumes to me that they are believing in me that much. I am very thankful and excited for what’s ahead.”

The LaGrange location kept with its slogan of ‘Not real glamorous, but dang sure delicious,’ by keeping the floor plan open, adding large picnic tables and community bars so customers can enjoy a slice of pizza with a stranger.

“You sit with a stranger and end up having a good time and making new friends,” Manny said. “Since the beginning of Karvelas, this seating and atmosphere has manifested from meeting new people. The community seating layouts have made a lot of cool stories where people met eating and then had regular times where they came to eat.”

All three agreed that the staff at Karvelas are all a ‘huge’ part of the success of the restaurant.

“It would not be possible without the staff, they have really stepped up,” Nick said. “We are always looking for good people to join the Karvelas family.”

The community of LaGrange can expect some differences in this location but still get pizza slices for lunch, everyday full pies, appetizers and its ‘famous fries,’ according to Manny.

“LaGrange is vibrant and growing,” Joey said. “We are going to be a good addition to the historic downtown area. It is a highly-addictive experience eating one of our pizzas where you will be craving it and coming back in two weeks for another slice.”

Joey said they take advantage of the Georgia humidity to make their own dough. With all tomatoes imported from Italy, fresh vegetables and high-quality mozzarella, Karvelas is ready to heat up the oven and start serving.

“It is an upbeat, friendly and family atmosphere that couples with outstanding food,” Manny said. “We focus on putting out good food and treat everyone like family.”

With final touches being added, including torching the table tops themselves, Karvelas is expected to open soon.

“Keep track of our progress through social media and look for an announcement,” Joey said.