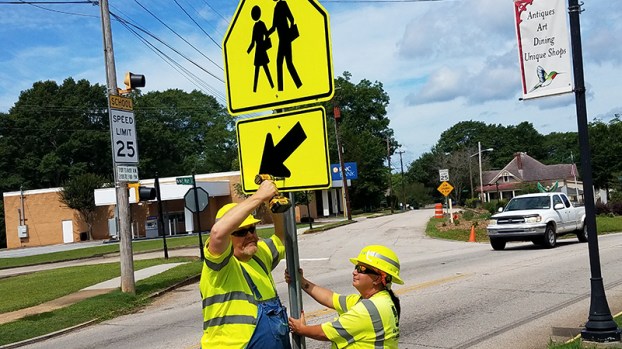 The City of Hogansville can expect to see some changes in the downtown area pertaining to signage and pedestrian safety.

“We are currently in the process of working with folks at District 3 of Department of Transportation,” said David Milliron, Hogansville city manager. “We are updating the signage everywhere, and we were awarded safety grants to update all the crossings and swap out signs.”

Milliron said the visibility of safety signs was also a problem and that trees were blocking major safety signs.

“To improve visibility of signs we are going to cut (trees) all the way down Highway 54,” Milliron said. “We will be meeting with the engineer and police chief to discuss the lighted sidewalks.”

Installation of four pedestrian crossing signs with solar-powered, rapid-flash beacons that will provide high visibility to motorists approaching pedestrian crosswalks in downtown Hogansville will be finished within the next three months, according to Milliron.

“The most important thing is that signage is visible,” Milliron said.

The city has seen an increase in pedestrian foot traffic throughout downtown due to business’s moving into the store fronts, festivals and the expansion of trails and walkability.

“It always comes back to safety, and we want folks to see these signs and be safe,” Milliron said. “People have become conditioned to see the signs and ignore them, but with these high visibility signs, they can’t ignore them now.”

Milliron also said that when construction begins on city hall, the foot traffic will increase even more.

“We expect those plans to be finished and in by the end of the month,” Milliron said. “Downtown is growing. This is important now.”

Along with new signs being added to downtown and near the elementary school, the city is also working to fix storm damages in the area.

The mission of Heart2Heart Family Enrichment Center has expanded since Tamala Hardnett first came up with the idea of a... read more