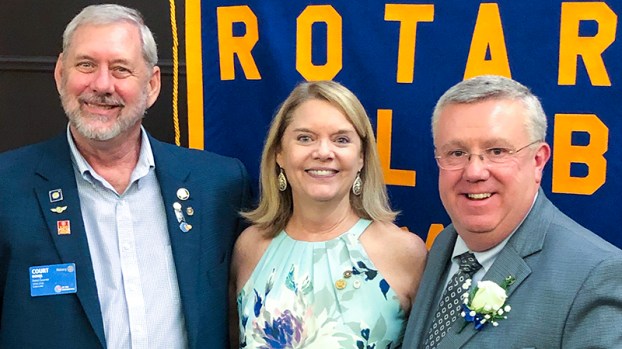 On Thursday, Sheriff James Woodruff was recognized by the Rotary Club of LaGrange as the Charles D. Hudson, Service Above Self Citizen of the Year. Pictured are Georgia Rotary Dist. 6990 Governor Court Dowis, Woodruff and LaGrange Rotary Club President Susan Ferguson. (Contributed)

On Tuesday night, the Rotary Club of LaGrange celebrated the last year and the year to come with an end-of-year banquet at LaGrange College’s Turner Hall.

The evening included a review of the club’s accomplishments during the year, award presentations and the introduction and pinning of D. Linder, the club’s 2019-2020 president. The club’s 16 new members and 49 members with perfect attendance were also recognized, and citizens making a difference in the community were recognized.

Troup County Sheriff James Woodruff was recognized by the Rotary Club of LaGrange as the Charles D. Hudson Service Above Self, Citizen of the Year Award. The award was established in 1996, and the winner is chosen by Rotary’s board based on service to the community.

“He is so committed to our community, and he is a man of faith,” said Susan Ferguson, the current Rotary Club of LaGrange president. “He is a genuine person. … He encourages all of his staff to be involved in the community, especially where youth are involved.”

Ferguson said that Woodruff’s work with local youth through a variety of programs offered by the sheriff’s office was a large part of the reason why he was chosen. The fact that he received the President’s Award from the Georgia Sheriff’s Association last year was also considered.

Woodruff said that he felt honored to receive the award.

“I do a lot with the youth in our county,” Woodruff said. “We have the junior deputy program, the sheriff for a day, sheriff’s academy for youth, the Explorer program. That is one of the things I ran on in 2012 is to reach out to our youth.”

Woodruff said that helping local children is an important part of his work.

“I’ve always felt like it is easier to reach out to our youth and try to get them to go on the right path [and] direction,” Woodruff said. “Of course, people when they get older can change, but if we can get our youth to go in the right direction to start with, it is much easier for them to have a successful path in life.”

Woodruff, who is a member of the Lion’s Club, was a guest at the meeting.

The LaGrange Rotary Club also presented both Karin and Rod Thomson with the club’s Charles D. Hudson Service Above Self, Rotarian of the Year Award.  The winner of the award is chosen by the club president, and Ferguson said the couple helped with practically every event that Rotary Club of LaGrange took part in.

“Karin literally was involved in almost every project we did,” Ferguson said. “She decorated a table for the My Favorite Things luncheon. This is the first-time Rotary has been represented at that event. … She was a star, and she was always right there to help me. She and her husband do check-in every single week.”

Rod Thomson also created the scan-able badge check-in system that is now used by Rotary Club members to check in at each meeting.

The Barbara Henigin Above and Beyond Service Award was presented to Forrest (Clark) Johnson III.  Johnson was given the award due to his firm commitment to the club through his weekly bulletins and his involvement in many of the service projects, including co-chairing the Alzheimer’s walk, serving as a Salvation Army bell ringer and sponsoring teams in the annual golf tournament.

“If you start back from day one, he has held just about every position there is,” Ferguson said. “He is a past president. … He has done our bulletin for nine years now.”