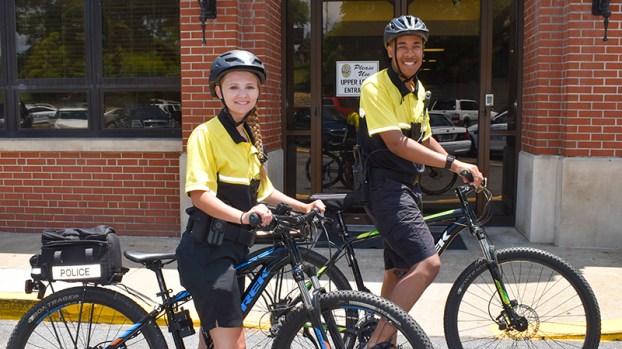 Cadets Julie Meacham and Christopher Ridgeway prepare to ride out of the LaGrange Police Department for a patrol. (Alicia B. Hill | Daily News)

With The Thread trail steadily growing and local parks seeing higher rates of use, LaGrange Police Department has found a creative way to increase patrols in recreation areas during the summer.

LPD Chief Lou Dekmar said the bike patrol program is based off a cadet program that he saw in use when he was in high school that employed cadets to patrol state parks during the summer. The LPD program employs two college students from LaGrange who are pursuing careers in criminal justice.

“We created a cadet program,” said Dekmar, during a recent city council work session. “They can earn some summer money. We did a week training with them on the bikes and the radio and safety factors. They are now patrolling The Thread and the different parks, and they are just a force multiplier for us. So, during the summer we will have that visibility with police cadets.”

The cadets estimate that they ride 18 to 20 miles a day on The Thread and through local parks, and the response that they have gotten from the people they talk to has been overwhelmingly positive.

“We’ve gotten a lot of complements,” Cadet Christopher Ridgeway said. “I’ve noticed it even by myself. They feel safer. They feel like it is a good thing.”

Since the cadets are not full-fledged officers, they would need to report any serious trouble over their radios, but they said that many people just want to know that someone with the LPD is on the lookout. The cadets said that they have yet to encounter a serious situation, but they had seen suspicious looking groups drive away as soon as they saw the bikes.

“It is a good in a community outreach way, but it does also serve as a deterrent,” Cadet Julie Meacham said. “We have had a couple of situations where we pulled up to a parking lot or park and the cars have taken off before we could radio anything in that is suspicious. It has helped prevent those situations.”

Ridgeway interned with LPD previously, but serving on a bike patrol was not something he had considered until he received a phone call from LPD Chief Lou Dekmar. However, as a junior political science major at Georgia State University, he hopes to use the experience when he becomes a lawyer after he graduates.

“I feel like it will give me a different point of view on things,” Ridgeway said. “I’m not an officer, but that is how I look at it. I have to set an example. I have to carry myself differently. It just gives me a whole different outlook on things, especially when I am in my uniform.”

Meanwhile, Meacham is completing her public safety degree at the University of North Georgia and hopes to gain experience for her eventual career in law enforcement.

“It is a good way for me to get to know this department, if I wanted to come work here after graduation,” Meacham said. “It gives me good insight into what it is like working here. I have the radio. I hear how other officers handle things.”

The cadets said they felt like they had learned a lot from the LPD officers who regularly patrol throughout the city.

On Tuesday night, the Rotary Club of LaGrange celebrated the last year and the year to come with an end-of-year... read more