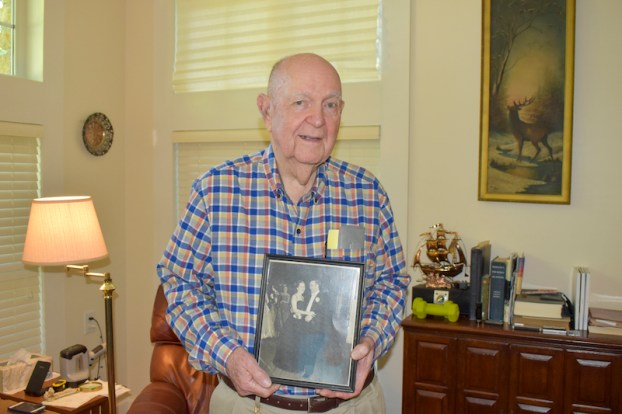 Fred Jones has had a front row seat to technological innovation for most of his life.

Jones grew-up in Booneville, Mississippi, but he enjoyed visiting family in Troup County. So, when he got ready to go to college, he ended up at Georgia Tech, where he described himself as more interested in extracurriculars than perfect grades.

“I did finally get out [of college],” Jones said. “My mother died in my last year of school, so I took off six months and went to Mississippi to be with her. She was suffering from cancer.”

Despite his mother’s death, Jones had something to be excited about after graduation — his marriage to his longtime love, Sammie Nell Fugitt.

“I married my childhood sweetheart,” Jones said. “How I got her I’ll never know, because she was the most sought-after girl in Louisville, Mississippi, and somehow or another, I won her over. We were married for 66 years. She died two and a half years ago here [at Vernon Woods], and she went with me through all of my assignments.”

Jones called his relationship with his wife his greatest accomplishment — no minor statement considering where his life lead him.

“When I got out [of school], they had places where you could interview, and I got several interviews,” Jones said. “So, I went to Schenectady, New York, and I had some interesting assignments there. One was General Electric. The Germans were ahead of us on a lot of things, and [Wernher] Von Braun came over with about 30 of the German engineers, and of course, I was an errand boy, but I got to meet Von Braun. They were there, and we had about 30 of the V-2 rockets there that we were disassembling and measuring. In the meantime, our real engineers were designing what became the first missile that the United States called the Hermes.”

Jones was then sent to Lynn, Massachusetts, as part of the Georgia Tech program.

“I was on what they called a three-year program at Georgia Tech,” Jones said. “You had to go to three different locations, and it was a three-year thing. That way, they got a chance to look at the students, and the students got the chance to try to figure out what they liked the best. It was a good thing.”

It was during his time in Massachusetts that the couple had their son, Lamar. Meanwhile, he saw American aircraft technology moving forward to match that of other countries.

“The Germans had no propeller planes, and we were following along with the English,” Jones said. “The English sent a bunch of people over here. I worked with some of them to do some things. Then they said, ‘We need you to go to Fort Wayne, Indiana, to check out the motor business.’ It would be my third assignment, so I went out to Fort Wayne, and about that time, the Army caught up with me. They caught up with me and said, ‘It’s time for you to go to the Army.’ So, they sent me down to El Paso, Texas, to Fort Bliss.”

It was 1951 when he entered the U.S. Army., and Jones said that because of his time at Georgia Tech, he received a second lieutenant commission. He expected to be shipped out, since the Korean War was underway.

“I was ready to go to Korea, and I was standing around there, and they were talking about radar,” Jones said. “I said, ‘Oh, radar!’ I didn’t know a damn thing about radar. They said, ‘You went to Georgia Tech. You must know something about radar. You aren’t going to Korea. You are staying here, and you are going to be the commander of a group of trainees we are sending in here. There are 200 of them. They are going to train on this new gun we have, which is operated in conjunction with radar.’”

Jones remained at Fort Bliss for two years, training men how to use the new equipment, leaving the U.S. Army at the end of his enrollment as a first lieutenant.

After his time in the U.S. Army, Jones worked for General Electric for 30 years, and traveled extensively with his family for work.

“I went back with GE, and I stayed associated with the Army for eight more years, but I was not called to do anything,” Jones said. “So, I got out, and then I went into my regular job with General Electric.”

By the time he retired, he was the regional manager for electric motors for GE. His region stretched from Philadelphia to Miami to Louisiana. He worked some after retiring from GE, and Fred and Sammie Jones agreed to move back to Troup County to be near family.

“I was down at Jones Crossroads, and I was able to buy part of the farm from my aunt,” Jones said. “I was able to restore the house down there, and so even before I retired, I was working in Atlanta. We would come down on the weekends and work on fixing up the house.”

With The Thread trail steadily growing and local parks seeing higher rates of use, LaGrange Police Department has found a... read more