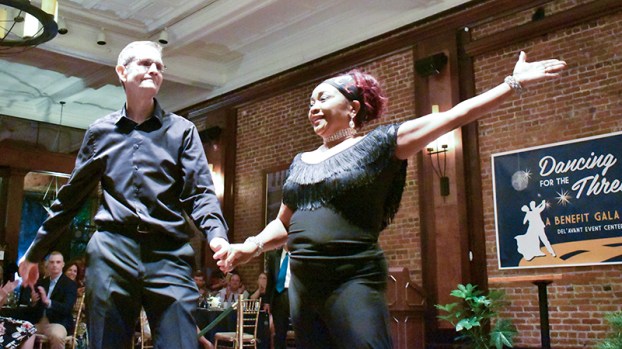 The second annual Dancing for the Thread competition has completely sold out of its 350 available tickets before the competition was even able to promote ticket sales, according to Natalie Hale, executive director of the Friends of the Thread.

“This year we were thrilled to see the support we got with ticket sales,” said Hale. “We never anticipated to sell out as quickly as we did. Last year, we didn’t sell out until the week of the event.”

On August 3 at Del’avant, seven pairs of dancers will perform a choreographed dance, competing to win the trophy up for grabs and raise money for Friends of the Thread Trail (FOTT).

“Dancers who were chosen are big Thread enthusiasts, are friends of The Thread and are well-known people in the community,” Hale said.

The presenting sponsor this year is WellStar West Georgia Medical Center. Dancing for the Thread is the FOTT’s largest fundraiser, and proceeds go to pay for the construction and maintenance of the Thread.

The goal this year for the event is to raise $60,000 according to Hale. Additionally, this year fans can watch, donate and vote online for their favorite dancers.

A barometer will show which couple is in the lead, so fans can continue to vote remotely and boost teams to victory.

Hale said this gives a way for those not attending to participate by voting and watching the livestream, which LGTV will do.

“The people who are dancing are excited, and this such an awesome community event,” Hale said. “We are thrilled by the support the community has shown for The Thread.”

To vote for your favorite dancing team visit Thethreadtrail.salsalabs.org/gala2019 or call (706) 402-8150 for more information.

During the week of July 7-13, the Azalea Storytelling Community will host the fourth annual Donald Davis Storytelling Workshop in... read more