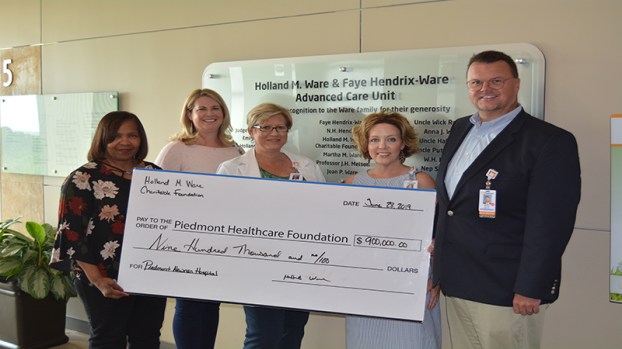 Hogansville residents Holland Ware and Faye Hendrix-Ware gave their final installment of $900,000 toward the construction of a new, 18-bed Advanced Care Unit on Friday, June 28, according to a Piedmont Newnan Hospital press release. This completes the couples’ 2.5 million commitment they made in 2017 to support the expansion at the hospital.

According to the press release, the money donated has been used to help support the construction of the new unit that opened on December 20, 2018, and to support the High-Risk Breast Clinic at the Faye Hendrix-Ware Breast Health Center.

“When asked why we wanted to do this, we have both had family members with cancer,” said Holland. “It is an honor for me and my family to contribute to the expansion of our local hospital after the level of care and concern they have shown in all areas of patient care. We look forward to continuing to partner on bigger projects that will be beneficial to Coweta County.”

Since opening in December, nearly 600 patients have received care in the new unit. According to the release, The Holland M. Ware and Faye Hendrix Ware Advanced Care Unit increased the total number of beds at Piedmont Newnan to 154 and has allowed the hospital to serve more critically ill patients close to home.

“Both Holland and I have had personal and family experiences where cancer has touched our lives and we are both very pleased to be a part of the cutting-edge technology and early detection methods available through our contributions to Piedmont Newnan Hospital,” said Faye in the press release. “We are certain that not only the level of patient care and treatment will be superior, but the family experience will be greatly enhanced as well. Partnering with Piedmont is the perfect fit and the opening of both the high-risk breast clinic and Advanced Care Unit will have such a positive impact on our communities.”

Holland said that the 18-rooms are beneficial because it offers a space for those leaving the intensive care until but aren’t quite ready to stay in a normal room.

“We are extremely grateful to Faye and Holland for this monumental gift. Their confidence in the care we provide our patients is evident in this level of support,” said Mike Robertson, CEO ofPiedmont Newnan Hospital in a press release. “Thanks to their contribution, we continue to make a positive difference in the lives we touch.”

Piedmont Newnan is a nonprofit, community hospital, and the only acute-care facility in Coweta County. Since opening a new facility in 2012, the hospital has seen tremendous growth, with a 54% increase in hospital admissions. According to the release, the Wares contribution has allowed Piedmont Newnan to keep more patients close to home for care.

WEST POINT — A longtime Valley restaurant which recently moved to West Point has announced it has closed its doors. ... read more