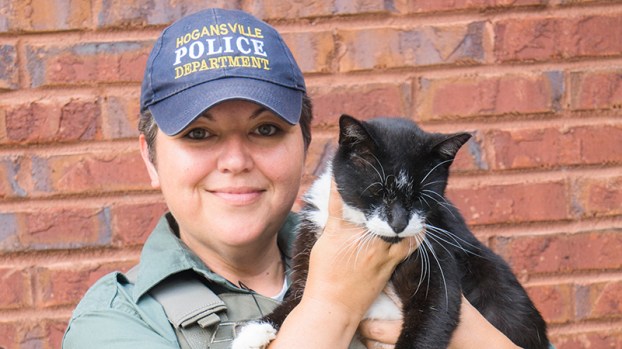 He’s a regular offender at the Hogansville Police Department and can usually be found sitting in the court room or stealing treats from the office.

Bandit “The Station Cat” was adopted by the HPD approximately five-years-ago.

“When he first showed up, he was just a stray that we would throw scraps,” said Jennifer Baker, HPD code enforcement officer. “We then had him fixed, and he has been here ever since. Bandit stays and goes as he pleases.”

Bandit has put on 10 pounds since being adopted by the department and has the run of the place, according to Baker. His black and white colors and tendency to scurry away from people trying to pet him makes the name Bandit suit him even more.

“He gets the best of both worlds of being inside or outside with the freedom to come and go as he please,” Baker said. “Every morning if he is in the mood to play. He will pretend to want his belly petted but will latch onto you and mess around.”

Bandit provides an extra warm body in the office for dispatchers having hard shifts, or a friendly distraction for officers coming and going.

“For the most part dispatchers are alone for their 12 hour shifts, so he will come in and be there for you,” Baker said. “His favorite place to lay is the printer, and we will have to shoo him off.”

When people walk the through door of HPD, Baker said they typically try to tell us that Bandit is dead.

“He just doesn’t move,” Baker said. “You have to pet him for a second, and he will move a little, and they are amused. It is quite entertaining to see people’s reactions.”

Baker said the best part of having Bandit around is the community reaction.

“He is the one that adopted us at the end of the day,” Baker said.

You can follow Bandit along on his police journey at his Facebook page, Bandit the Station Cat.

On Monday, the Troup County Board of Commissioners announced that John Ekaitis will be the new Troup County fire chief,... read more