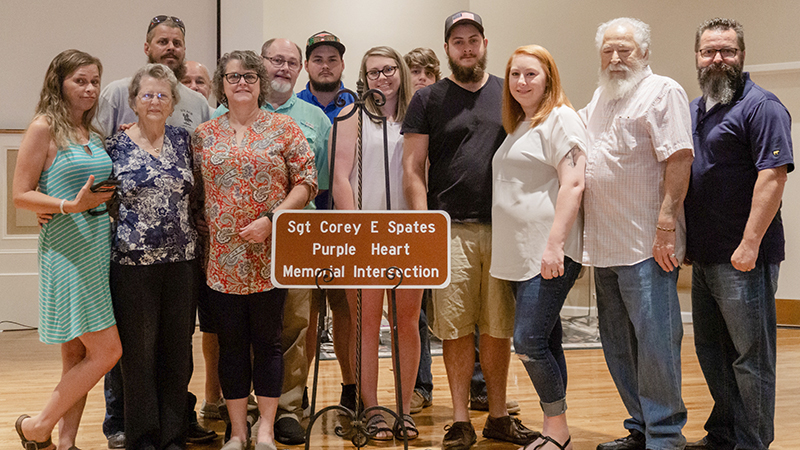 No eye was left untouched by tears Thursday morning during a ceremony honoring a local fallen solider.

The Troup County Board of Commissioners endorsed the request of the Georgia Department of Transportation (GDOT) for the intersection of US29/SR14 West Point Road at Pegasus Parkway to be named after U.S. Army Sergeant Corey Emmett Spates.

“Today, it meant everything to me,” said Corey’s brother, Michael Spates. “He gave the ultimate price and this is just a small token of what the county can give to us, so this means a lot.”

Corey was from Troup County, graduated from Troup High School and then went to serve in the United States Armed Forces.

During his deployment in Iraq in 2008, Corey was killed fighting in Operation Iraqi Freedom on Feb. 10, leaving behind his newly wedded wife, Celeste.

“This is very important time,” said Representative Randy Nix. “We are here to honor a local hero and the ultimate sacrifice he gave for his country.”

Nix said that the family, himself, the commissioners and GDOT had been working on the dedication for a long time.

After recognizing each individual who played a key role in making sure the resolution was passed in the house, Nix recognized the sacrifice Corey gave.

“The respect, the love and the leadership this community has for this family [is sincere] and we recognize the sacrifice that not only Corey made, but the family members made,” Nix said. “Corey’s grandmother, Sandra Simpson, has been the driving force to make sure we got this memorial up.”

Western Heights Baptist Church held the service for the unveiling of the sign that was placed on the intersection Thursday. Family members, local and state officials and friends of Corey filled the church pews to be a part of the moment they have been waiting for since February.

“It’s good that you come here because this is where Corey worshipped,” Brown said. “This is the alter in which this young man came to do his Sabbath. This was the place where he often knelt. These are the halls in which the congregation gathered ‘round him and anointed him. Those are the doors he marched out of trusting in God.”

Brown said it was important that they gathered at the church to remember who he was and whose he was.

Corey was described by those who were close to him in his 21 years of life as strong and resilient, according to Brown.

“Corey Spates was a beautiful young man,” Brown said. “I don’t mean he was just handsome, he was handsome, but he was strong physically, he was agile, he was mentally quick, he was smart.”

Thursday was a morning not to relive his passing more than 10 years ago, but a morning to ensure his life is not forgotten.

“I am very proud and honored to be with you today, and on behalf of the GDOT it is a privilege for us to be involved in such a dedication,” Brooks said.

Simpson and Corey’s three brothers Jacob Thomas, Patrick Thomas and Michael concluded the ceremony by unveiling the sign that brought each member of the crowd to their feet, followed by a roar of applause and a few tears, as those gathered rejoiced to see Corey’s life honored.