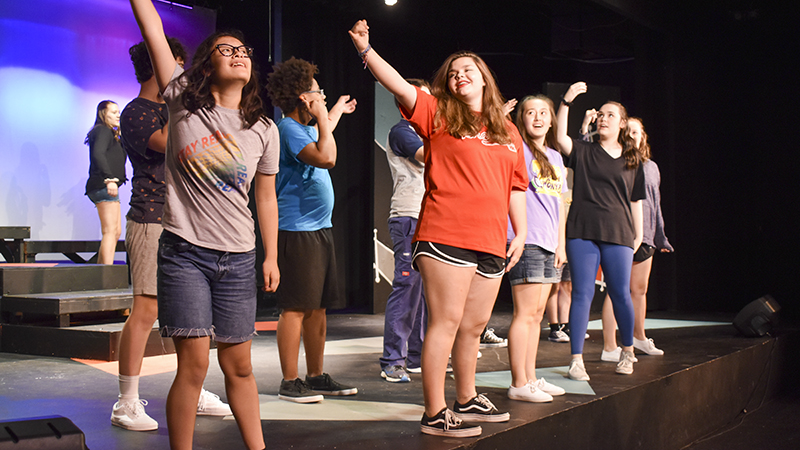 On Saturday and Sunday, young performers will take to the stage at the Lafayette Society for Performing Arts’ Black Box Theatre with a production of “Bye, Bye Birdie.”

The Lafayette Theatre Academy production of the 1963 musical comedy will feature captivating dance numbers, quirky teens and even a bit of rock and roll. Many of the characters in the play are close to the same age as the rising eighth through recently graduated seniors making the characters somewhat relatable for the teens.

“We wanted something that was definitely teenager friendly,” said Director Valerie Longshore-Sargent. “‘Bye Bye, Birdie’ has been around since the 60s, but its storyline still has an appeal that can translate to a younger generation, plus singing and dancing. These guys have had a lot of fun with it.”

The performance marks the completion of a two-week camp, where students learned about theater, while preparing for the musical performance.

“We’ve been building the set and practicing the musical, and we’ve been learning it all from scratch,” said Render McLeod, who plays Mr. MacAfee. “[It’s been] rigorous.”

Many of the young performers have previously taken part in other Lafayette Theatre Academy productions, and they said that the biggest difference between “Bye, Bye Birdie” and other shows is the timeframe.

“You have to put together a show in a very condensed amount of time,” said Taylor Wicklund, who plays Ursula Merkle. “You only have two weeks to put on a show, so everything has to be done very quickly, and you have to remember things.”

Longshore-Sargent said that the students have done a great job with the short time to prepare for the show, especially in the camp’s first year.

“A lot of these guys come in with experience either from the LSPA or doing stuff with their own school, but they are getting to work with people they’ve never worked with before,” Longshore-Sargent said. “They’ve made new friends. They’ve certainly bonded, so it definitely has that summer camp feel to it, but they are still doing a show at the same time. It is really a lot of fun.”

“We immediately bonded — this cast has,” said Ellie Moone, who plays Kim MacAfee. “We haven’t had any difficulties with anything, so it is really good to work together.”

The Lafayette Theatre Academy will host classes for a variety of age groups in August.

“Bye, Bye Birdie” will be performed on Saturday and Sunday at 4 p.m. and 7 p.m. at 214 Bull Street in LaGrange. For more information, visit Lsparts.org.