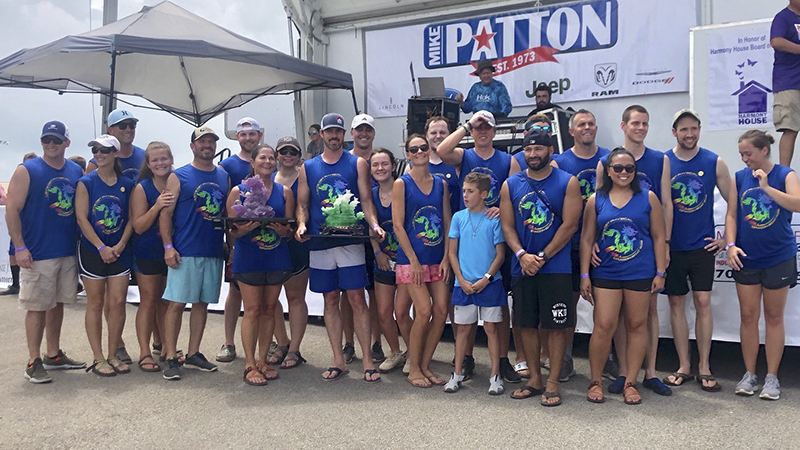 CORRECTION: This story has been updated to correct the second and third-place teams.

More than 1,000 people attended Saturday’s dragon boat race at West Point Lake, which in its fourth year continued to grow in its support of Harmony House Domestic Violence Shelter.

This year’s West Point Lake Dragon Boat Race included 28 teams and brought a large crowd to Pyne Road Park. Officially, the winning team was Southern Rehab and Sports Medicine with a time of 58.628 seconds, but the day’s real winner was the domestic violence center, which raised around $40,000 to help victims of domestic violence in Troup County and the surrounding area.

All of the money raised will go directly to helping fund the shelter, which received 900 crisis calls last year, the most in its history.

“This fundraiser brings in unrestricted funds, so we can use this for things that grants don’t want to pay for sometimes, such as the car insurance or the light bill for the shelter,” said Michele Bedingfield, executive director of Harmony House. “It can go for the unrestricted needs, but it is also used to leverage other dollars.”

Bedingfield said on every grant application she fills out, there are questions about community support. She said the dragon boat race makes it easy to explain how well the Troup County community supports Harmony House. She said around 700 people participated, with several thousand spectating.

It’s also a chance to raise awareness for the shelter.

“At every single practice, I had an opportunity to speak to people about what Harmony House does, what our services are and how to make referrals,” Bedingfield said.

Many of the teams who participated said the event brings them together, as people on different shifts within the same company get a chance to get to know one another.

“We work with a lot of the organizations that are here, especially for Harmony House,” said Ryan Cook, the associated dean of campus life at LaGrange College. “It’s a great event that raises a lot of money, while doing a really fun, team-building activity.”

SouthCrest Church returned for the second year to support Harmony House and to be visible in the community. SouthCrest has campuses in Newnan and LaGrange.

Second place was First Baptist Church on the square and third place was High Ground CrossFit.