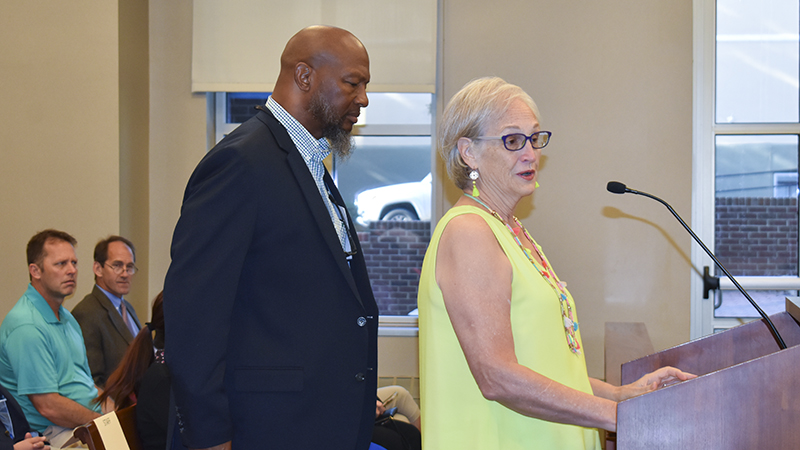 Troup County Democratic Committee Chair Pat Darden and former Troup County NAACP President Ernest Ward shared concerns regarding a variety of issues during the meeting, including elections, board meeting times and county voting districts. Ward and Darden previously approached the board with a similar list of concerns in July 2018.

“I am here on behalf of all the people who cannot rearrange their schedules, who have to be at their job or they don’t get paid,” Darden said.

She noted that LaGrange, West Point and Hogansville, as well as several surrounding counties, have evening meetings, encouraging the board of commissioners to follow their example. Ward said that holding the meetings at a time when many citizens have to be at work made them inaccessible to those citizens.

Darden also argued that the location of the meetings favors LaGrange over the county’s other cities and residents of the unincorporated area of the county.

“This year you did hold a state of the county meeting,” Darden said.

Crews emphasized the good turnout at the Grey Hill Community Center meeting, which is in unincorporated Troup County between West Point and LaGrange. Commissioner Lewis Davis noted that the county also held an evening work session meeting in West Point in November. Additionally, the Troup County Board of Commissioners held a meeting in Hogansville last year. Darden also argued that the commission did not reflect the community as a whole.

“You as a group are not representative of Troup County,” Darden said. “You are 80 percent white and upper middle class. There will never be more people of color on this board without breaking up the districts. The school board did that recently.”

Ward likewise questioned why the district lines are drawn where they are.

“The Troup County Commission line should align with the Troup County School district voting line as well as having commissioners which the citizens of West Point and Hogansville select as representatives,” Ward said.

Darden also argued that having the commission chairman elected by the county at large gives the City of LaGrange too much power.

“We’ve had five districts with one elected at large that in effect gives LaGrange and North Troup County another representative on the board,” Darden said. “So, they have a double whammy on the decisions that are made.”

In practice, County Commission Chairman Patrick Crews rarely votes during Troup County Board of Commissioners meetings, instead serving as a tiebreaker in divided votes. Commissioner Morris Jones spoke on the concern saying that the districts are population based.

“We go to the State of Georgia for redistricting, and when you get in there, then one commissioner looks at his district lines, and he goes by population,” Commissioner Morris Jones said. “What the state tries to do is to make every commissioner in their districts be as close in population as they possibly can be, and when they look at that, they also look at the number of county commissioners that you have that represent your county, whether you are insufficient or sufficient with the number.”

Finally, Darden and Ward addressed concerns regarding the election process, expressing concern that the voting process wasn’t properly explained to citizens casting absentee and provisional ballots. Any ballots that are not properly cast are not be counted.

“I think the issue is the election board gets to make those recommendations, those decisions, and they have not come to a clear decision as to alternate polling places in some of our districts,” Crews said. “We are working with that board, but the citizens of that group have not come to a consensus of what is best.”