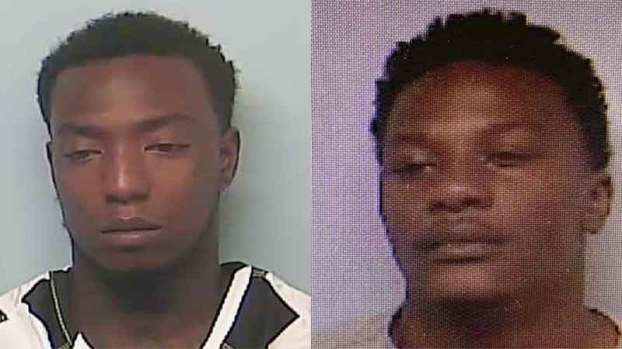 Kadezmeon Lovett, left, has been arrested on the charges of criminal attempt murder, aggravated assault, aggravated battery, robbery and possession of a knife during certain felonies. The Troup County Sheriff's Office is looking for Thillinius Marquis Gray, right, and a third suspect.

An alleged robbery plan turned more serious last week, leaving one man with serious injuries and three others facing attempted murder charges, according to a news release from the Troup County Sheriff’s Office.

Kadezmeon Lovett, 30, of Morrow, has been arrested and charged with criminal attempt murder, aggravated assault, aggravated battery, robbery and possession of a knife during certain felonies. Thillinius Gray, 29, and an unknown third suspect will also face the same charges once arrested.

The sheriff’s office said four males — Lovett, Gray, the unknown third suspect and the eventual victim — all from the Atlanta area planned to drive to LaGrange Monday night to commit a robbery. As the men drove to LaGrange, something changed and they turned on the 20-year-old victim, although the reasons are unclear.

Lovett, Gray and the unknown suspect drove the victim to a location on Hutchinson Mill Road and forced him to get out of the car, and beat and kicked him repeatedly, according to the news release. The victim was stabbed at least eight times on various parts of the body and passed out.

He was then put in the trunk and the three men intended to kill him at another location, according to the news release.

The victim used the trunk release, opened the trunk and jumped out of the car. The three suspects then fled the area after realizing the victim escaped.

The sheriff’s office was dispatched the 2200 block of New Hutchinson Mill Road on July 11 regarding a male subject on the side of the road that appeared to be severely injured and bleeding. Medical personnel responded to the scene and transported the victim to a Columbus area hospital due to the seriousness of his injuries. He has since been released.

Investigators spoke to the victim at the hospital and were able to determine what happened, according to the news release.

Construction has begun on phase two of the Bryant Lake Residential Community build, which was celebrated with a ribbon cutting... read more