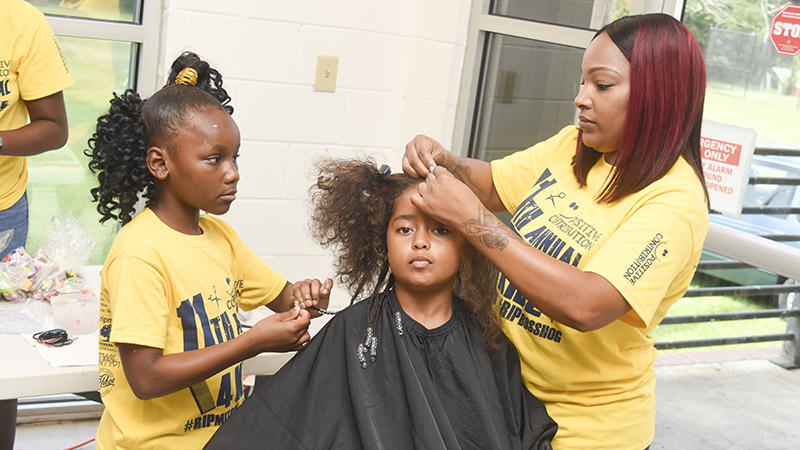 The twelfth annual ‘Haircutz & Stylez 4 Kidz’ free hair cutting event is fast approaching and more than 100 volunteers are gearing up to make sure the event is a success.

“Basically, this is just a free haircut for children in the community,” said organizer Michael Fannin. “It is a fun-filled day for families and gives them an opportunity to prepare for the upcoming school year.”

Fannin said that not only will the stylists be giving elementary to high school students free haircuts, but the first 100 students to arrive will receive a free backpack and school supplies.

“First, for the community, it brings everybody together, and it gives everyone a chance to unite,” Fannin said. “Especially, if you haven’t seen someone in a while. It is a family atmosphere where you can meet and greet new people.”

The opportunity to have a new haircut, Fannin said, gives the kids more appreciation and increases their self-respect.

“Not only that, but it’s good to assist the families who can’t afford it,” Fannin said. “It always feels good to get new things.”

It is Fannin’s twelfth year putting on the event, in which he said it is his duty now after so many years of the event taking place and supporting the community in this small, but important way.

“At this point, it is something I have to do,” Fannin said. “I was one of those chosen people who had an idea and my family and friends helped me see out that idea. The event goes for itself now.”

Fannin will be moving to Dubai in the coming months, but still plans on coming back in the summers to make sure the event takes place.

“It will be first come, first serve,” Fannin said. “We will have 20 barbers and 20 beauticians doing hair and other volunteers helping out.”

The event will be held from 1 p.m. to 4 p.m. on Aug. 11 at the William Griggs Rec Center, and students can come out for a free haircut, in addition to  face painting and fun. To learn more or to donate for the event, go to Positivecontribution.org.