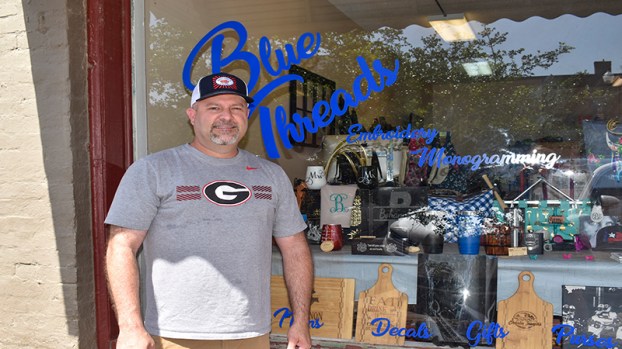 Co-owner Chad Bohannon pauses for a photo in front of Blue Threads on Tuesday. (Alicia B. Hill | Daily News)

Walking into Blue Threads on a weekday morning, customers can easily see the latest major project being taken on by the husband/wife ownership team.

Chad and Kelly Bohannon opened Blue Threads last year, and their store has stayed busy with local orders — including everything from printing t-shirts for a downtown business to laser-engraving steel tumblers for a nearby school system to recreating a cherished family shirt, whose original has seen decades of love — ever since.

“My wife and I were looking for something different to do — something that we enjoy doing — and I had an interest in embroidery,” Chad Bohannon said. “I had an idea of how the machine worked and wanted to know the breakdown of the machine. We started in our living room and just started telling friends about what we were doing and doing monograms and bags.”

Soon, the couple was using their embroidery machine to embroider shirt and hats, and Chad began to create digital files that allowed the machine to essentially draw in thread.

Chad has served with LPD for five years and worked for the Columbus Police Department before that. The couple now rotate time in the store, and Chad said that the customers have been great.

“We’ve been very blessed with our customers’ comments and patronage,” Chad said. “They come in and continue to come back, so I think that is the ultimate respect that they could give. Them spending their hard-earned money is obviously a blessing, but coming back, that shows that I’ve earned their trust and keep satisfying them with what they need in this particular field.”

He said that seeing people wear his designs is one of the best parts of running Blue Threads.

“I enjoy the ability to see a project start with just an idea, and then finish it out, sitting in front of a customer with them actually wearing it,” Chad said. “It is just neat to have a phone conversation with a coach who tells me, ‘I’d like to have a shirt that has this on it and these colors and these sizes,’ and then actually go watch a game of players that are wearing the shirt that you created. That is what I get satisfaction out of.”

While there are other businesses in the community who provide the same services as Blue Threads, Chad said that there is enough demand for custom items that he wasn’t worried about the competition.

However, Blue Threads says the business does set itself apart with some of its smaller projects and customization options.

“I have a lot of customers who come in, and they just have one-off products,” Chad said. “They may just have a t-shirt that they love that they got 5-10 years ago, and they’d like to have another one made. One of my good customers brought in a shirt that his son gave him several years ago, and he wanted to have another one. He didn’t want it to go away, so we played around with the design and got it copied and made him another one, that way, he can give one to his son who is older now.”

In addition, Bohannon said the store also does a plethora of monogramming, and the store has recently been approved to engrave pocket knives.

Blue Threads is located at 130 Bull Street in LaGrange and is open Monday through Saturday from 10 a.m. to 6 p.m.

Indoor events to be primary focus for humid, wet weekend

While the weekend will be clustered with grey clouds and bouts of thunderstorms, there will be plenty of events to... read more