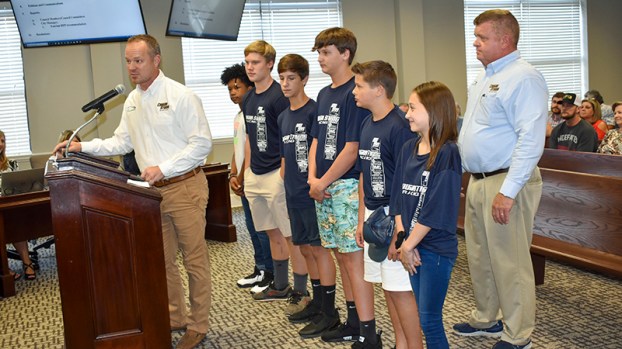 On Tuesday, Long Cane Middle School’s 999 team was recognized by the LaGrange City Council for being the best team in the nation during their first year as a team.

During the meeting, Chip Giles, director of transportation for TCSS and former LCMS principal, discussed the success of GreenPower racing in Troup County and the future of the student-built cars in Troup County. Giles offered ample encouragement during the program’s start at Long Cane, through the start of the 000 team two years ago and the 999 team last year, and the program is expected to grow exponentially during the upcoming school year.

“This program is really taking off,” Giles said. “Earlier this year, I sent a grant request in to the Callaway Foundation. It was a $305,000 grant, and the bottom line is, they approved the grant in every school in this county. That is elementary, middle and high school will receive Greenpower car kits and programs, including the private schools.”

“The real winners in this are the kids,” Giles said. “This is, in my opinion, the very best workforce development, STEM program out there.”

Based off of the race results for the first two years, the program is already showing a strong understanding of what it takes to make a car that goes the distance for local students, who participate in races all over the country. LCMS’s 000 team took eighth place in the first year of the program, and the Cougar Strong Racing program grew in its second year, adding a second team — the 999 team which was recognized on Tuesday.

“In our second year, we got an additional car kit [at LCMS], and that car was the 999 team,” Giles said

. “It was a brand-new car with brand new team members, and over the course of last school year, we participated in races both here in LaGrange. We had races in Chambers County. We had races up in Northern Alabama and one in Chattanooga, Tennessee.”

“After all was said and done, in a very competitive field, we beat every other middle school team in the nation and won the national championship, and our other car was number two in the nation,” Giles said. “That is not too shabby.”

Giles said that in addition to having the best race times for any middle school in the nation, the LCMS had a better time than all but two high schools in the nation, which compete in a different division.

“This was a brand-new team that we just put together this past school year, so it is even more significant that they accomplished what they did,” said Matthew Graham, Long Cane’s GreenPower instructor.

“It really was a fun and exciting event, and you could tell that people were really enjoying it,” said Mayor Jim Thornton, who welcomed everyone to the race that day. “I got to talk to folks from all over the country who had come to LaGrange for that particular event.”

On Thursday, Georgia Living Senior Home Care held a ribbon cutting to celebrate a new service to the community, which... read more