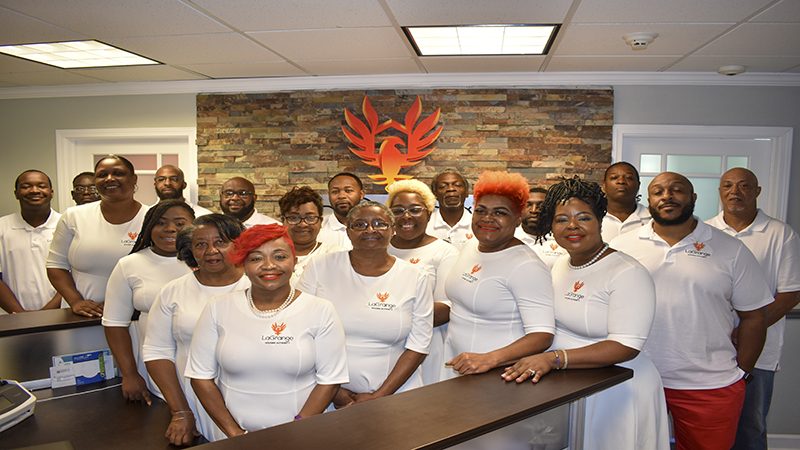 It’s no secret that big changes are coming for Whitesville Road and the surrounding area. But, one of the biggest changes of the year was unveiled on Monday when the LaGrange Housing Authority announced changes for building names and its mission in the community.

The LHA has been in the process of rebranding since 2014. The new phoenix logo designed by Chad Cooper, director of development for LHA, may not be a major surprise for those who have visited the authority’s website recently, but the new names and vision for the community as a whole might be.

All of the LHA properties will be renamed following the theme of the phoenix. The Benjamin Harvey Hill Homes are being renamed The Phoenix. Lucy Morgan Homes will be called Phoenix Way, and the new housing currently under development on Whitesville Road is set to be called Phoenix Landing. In addition to the new names, the properties are expected to soon take on the appearance of standard housing that LHA staff hope residents can be proud of.

“We want to look like an organization that people will invest in,” Heard said. “People will see us and say, ‘we would love to invest in the LaGrange Housing Authority because they have a housing plan that we like to see. They have a housing plan that includes the entire community and not just our area of town.’ Meaning, we want to create housing for district one and district two and in our county.”

Heard said that a large part of the reason behind rebranding is to encourage everyone from locals to international investors to see the housing authority in a new light, with a goal of enabling development of housing. LHA members had a front seat to the Georgia Initiative for Community Housing survey, which identified housing needs in the community, and it plans to step forward to help meet those needs, especially for those working to overcome poverty.

In November 2017, LHA shared plans for redeveloping sections of the city, primarily near LHA properties, to include safe, walkable pathways to business that offer services needed in the community, such as daycares, grocery stores and doctors’ offices. A financial commitment from the City of LaGrange and the Callaway Foundation to help fund a new park on Whitesville Road next to The Phoenix will help further those plans for community redevelopment, as would grant funding for a major redevelopment project in the area. However, the development of LHA properties is expected to improve the lives of those living in the area in the immediate future.

“I think they are looking for something new, something that is more modern here,” said Rena Boykin, housing director for the LaGrange Housing Authority. “These units have been here for 66 years. There is old plumbing and things of that nature that are still in the units. Now, they will get new plumbing, some new cabinets, new appliances that are more energy efficient, which will also help lower the cost of utility bills.”

Other improvements to the buildings include new insulation, transitioning away from gas to all electric and non-toxic interior paints. LHA is also working with residents to make sure that they get more than better homes. LHA is aiming for better lives.

“We’ve been working very hard for the past five years to invest in the people,” Boykin said. “So, when they do get the new units, it is not just, ‘hey, here is a new home.’ They will have a new mindset going into the units with them.”

The LHA has hosted a leadership academy for four years, training residents on everything from credit scores to timeliness at work to healthy eating. The LHA hopes the training will help residents on a variety of fronts ranging from decreasing utility bills to getting (and keeping) a good job. Cooper, a LaGrange 101 graduate, said he also works to share what he learned in the local informational class with residents.

Heard said LHA also works to explain entitlement programs to residents and the long-term impact of those programs.

“They are not programs that have been created to get people out of situations,” Heard said. “For me, they’ve been programs that keep people in situations, so we want to teach people to somehow not need those programs, how to be self-sufficient and to stand on their own, where if you did need it — if you got laid off and you just happen to need food stamps — it is only for a temporary time, and then you are back on your feet.”

She said that LHA works to provide the support that residents need to improve their selves, including transportation to work and training.