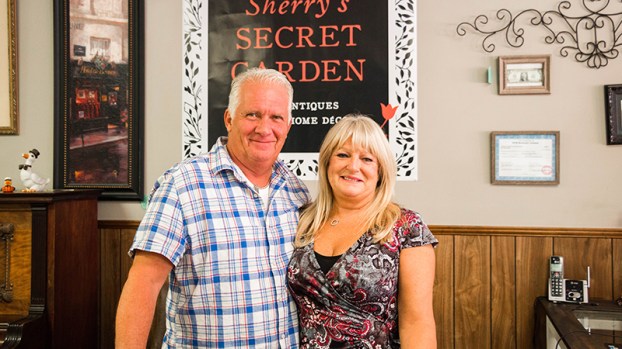 Sherry’s Secret Garden celebrated its grand opening on Saturday, showing off to the Hogansville community all the home décor, antiques, arts and more that it has to offer.

“We had this dream, but we didn’t think it would come true,” Sherry Turner said. “My husband (Randy) and I just had this thing in the back of our mind thinking we would love to own a store.”

When Sherry and Randy were driving through the downtown of Hogansville, they came across the building the store is in now and said that it was meant to be.

“We just came down the street and saw a for rent sign and thought it was perfect,” Sherry said. “It all just fell into place.”

Sherry runs the shop on Saturdays while Randy, who is retired, runs it during the week. When she’s not at her secret garden of a store, Sherry ‘s day job is retail design.

“It’s a little of my art and a lot of things I had in my house or things we purchased,” Sherry said. “The way it came together was a God thing.”

Within two hours of seeing the for-sale sign in April, Randy and Shelby had discussed and decided that Sherry’s Secret Garden was going to plant its roots in Hogansville.

“We opened May the fourth, and decided this weekend, it was time to do the grand opening,” Sherry said. “Since opening in May, it has been doing really well.”

Coming from a design background, Sherry said her favorite about opening the store has been decorating and putting it all together.

“We are going to grow and hopefully open more stores,” Sherry said. “I have never owned a store, but I grew up watching a wonderful aunt, who owned stores.”

Sherry said that she knows the store is helping the renaissance going on in the community.

“I think we are bringing a lot to Hogansville,” Sherry said. “I think the beauty of the store is making people want to see it and just being a part. Everybody in Hogansville is so friendly and so nice.”

According to Sherry, the community has been nothing but welcoming to the Turner’s, and their store, and she said she’s ready to move into the town.

Located on 206A East Main Street in downtown Hogansville, Sherry’s Secret Garden is open for business from 10 a.m. to 6 p.m., Tuesday through Saturday.

Lee Miller may not have made an appearance on the hit tv show, NCIS, but many of his stories from... read more