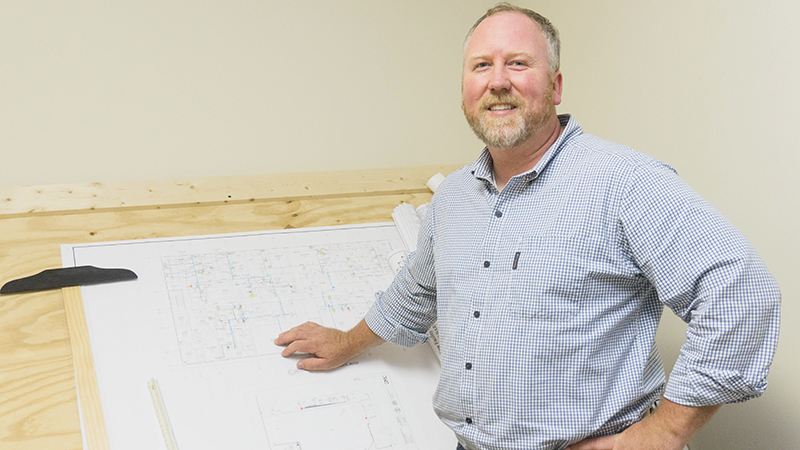 Alex Beall can often be found in his spacious, yet windowless, office on Whitesville Road, fielding and facilitating a litany of phone calls from plumbers out on repair and installation jobs throughout the LaGrange community and beyond. Beall, a LaGrange native, now works for Jackson Services as the director of company’s plumbing division, and has been in that role since selling his own business to his now-employer in July of 2017.

Beall’s path to selling a successful plumbing business was somewhat unconventional and is a testament to just how far hard work and underappreciated skill can go. Beall showed an aptitude from an early age for the sort of applied mathematics and geometry that plumbing requires, and it did not take him long to begin taking advantage of this skill.

“Plumbing came easy to me, I understood it and it made sense to me,” Beall said. “I excelled in that pretty quickly. It’s not all plugging toilets, a lot of it is flow rates, dealing with geometry, things like that.”

After taking a job with the Troup County School System at a young age in the maintenance division, Beall soon began branching out, completing side work as a plumber for family and friends.

“I started learning a lot about plumbing, and was started going to fix my grandmother’s faucet, or an aunt and uncle’s water heater, then I began to realize, ‘Hey I can make some money doing this,’” Beall said.

Working full-time with the school system as well as a consistent stream of additional plumbing work soon led to long days and short nights, thus Beall and his young family made the decision to start a plumbing company, Beall’s Plumbing. At the time, Beall was all of 25-years-old.

“There was a lot of fear and uncertainty at the time, it was right in the middle of the housing crisis,” Beall said of starting the company. “But, there was a need for plumbers in LaGrange at the time, so we were able to grow quickly.”

Throughout the course of the next decade, Beall’s company grew to employ up to 16 plumbers. In that span of time, Beall  joined a networking group through the LaGrange-Troup County Chamber of Commerce, which led him to meet Dale Jackson of Jackson Services. After a prolonged courtship process on the part of Jackson Services, Beall came to realize a merger was in the best interest of his growing company and its employees.

“The move was all about growth,” Beall said. “Now we offer full medical benefits, 401(k) with a match, vacation time, etc. You can be a plumber in LaGrange now and make a competitive wage and also have the benefits of a large company.”

The growth outlined initially by Beall and his team has been accomplished, while future growth plans look promising as well.

Beall is also married to his middle school sweetheart. He and his wife, Hanna, met in an 8th-grade Algebra class at Gardner-Newman Middle School and have been together ever since. The two now have three children, Chloe, Camden and Isla.