20 Under 40: Eley, owner of Two Big Feet, has growing business 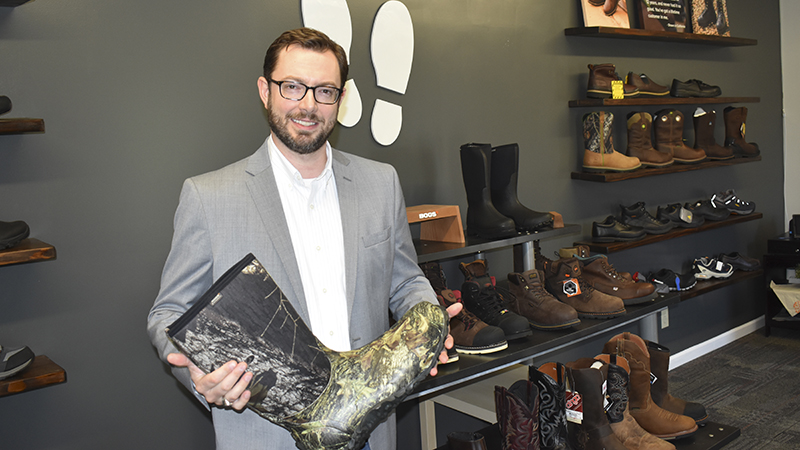 Brandon Eley makes very big shoes for very big feet. His company, the aptly-named 2BigFeet.com, provides a myriad of shoe options for people with shoes sizes of at least 14, ranging as high as 20 and beyond. The company, born prior to Eley’s 20th birthday, has seen its share of ups and downs throughout the years, but now has a bright outlook thanks to hard work and ingenuity of its founder.

Eley, a native of LaGrange, graduated from LaGrange High School before briefly attending LaGrange College. Before his freshman year at LaGrange College, he took an internship opportunity with Shorewood Packaging, an international packaging company, and struck up a serendipitous relationship with a co-worker, Neal Moncrief, who happened to have large feet.

“We used to talk about how we were going to quit our jobs and make lots of money as entrepreneurs,” Eley said with a smile. “He grew up in South Georgia with not a lot around him. He grew up with size 16 feet, never had many shoe options. He came up with this idea and asked me if I could build a website for him. So, we quit our jobs and started 2BigFeet.”

Eley, a teenager at the time with limited technical knowledge in an era before digital technology was as overwhelmingly present as it is today, felt confident he could create a serviceable website.

“I’ve always dreamed of owning my own business,” Eley said. “I’ve never really gotten along with authority figures telling me what to do. I would have always preferred entrepreneurship, but this was just a good idea.”

Eley kept one foot in two camps for two years immediately thereafter, attending college and running the business. However, it became evident he needed to commit to either one or the other and made the decision to focus on the business. He and his wife took over full ownership of the company in 2007, approximately seven years after its origin, when the company was all but bankrupt.

To make ends meet, Eley sold his small consulting business to a local company, Kelsey Advertising, and went to work there for five years. While working there, Eley helped develop the mobile website for McDonalds’ after the initial version of the iPhone was released.

Over the course of the next five years, 2BigFeet re-established itself as a viable brand, which eventually led Eley to turn his full-time attention to the company in 2014. The company eventually paid the entirety of its debt obligations back to its vendors, something Eley is very proud of.

“We paid 100 percent, every dime that we owed,” Eley said. “I felt very strongly about that.”

Eley sees the economic future of LaGrange and Troup County as primarily and overwhelmingly positive, thanks to solid leadership.

“In LaGrange and Troup County, we’ve been really blessed to have a lot of people who care enough about the community to get involved and donate their time and energy for the good of the county,” Eley said.