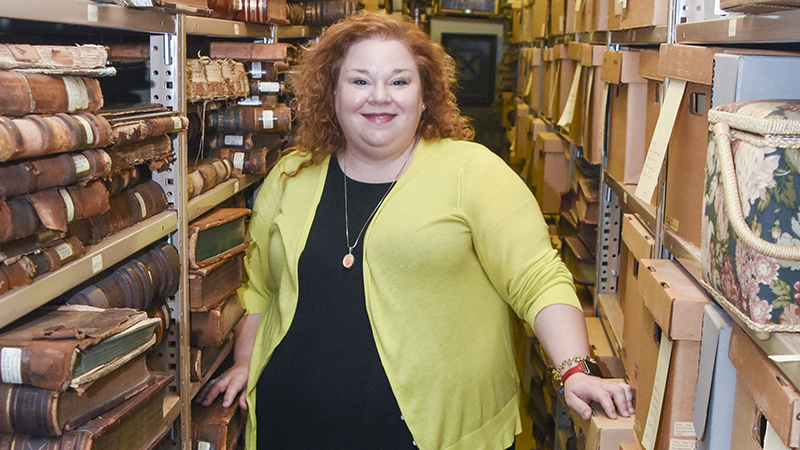 They say when you’re having fun the years fly by.

When counting up the years, Shannon Gavin Johnson, 38, was surprised when she realized that she’s already been at the Troup County Archives since 2009 — a full decade.  Johnson began at the archives as an intern in 2009 and worked her way up to become the director in January 2017.

She’s now in charge of the entity that preserves most of Troup County’s historic records, including city and county paperwork and school documents. The archives is filled with the history of local people and of Troup County as a whole, and it’s a job that Johnson doesn’t take lightly.

“To me, if you don’t know where this community has come from, who was here before us then how are you equipped to put a checkmark on a ballot that seats a city council and a mayor and a county commission or a president?” Johnson said.

Johnson was born in Mobile, Alabama, but grew up and went to high school in Fayette, a small town about an hour north of Tuscaloosa. Her family moved to Manchester in 2004, the same year Johnson graduated from Samford University with a degree in history.

She needed an internship at the time, and the Troup County Archives was the closest archives building. She started working there in 2009, taking on a part-time position a few months later. She worked part-time until she graduated from the University of Alabama with a master’s in history in 2011. She became director six years later.

“When I went into [this career], I was in a place in my life where I thought I would be happy sitting in a dark, hermetic environment and processing stuff day in and day out,” Johnson said while talking about all the archives has to offer. “Looking back, I think God knew the bigger picture. We are still able to do the tours, the banquets and hands-on history and stuff like that, and I think I enjoy the programming more than anything at this point.”

Johnson and her husband, Forrest, will have been married five years in December.

Johnson is also a member of the Junior Service League, Rotary Club, the Daughters of the American Revolution, the LaGrange International Friendship Exchange, the Lafayette Alliance and First United Methodist Church.

-Story and photos by Daniel Evans