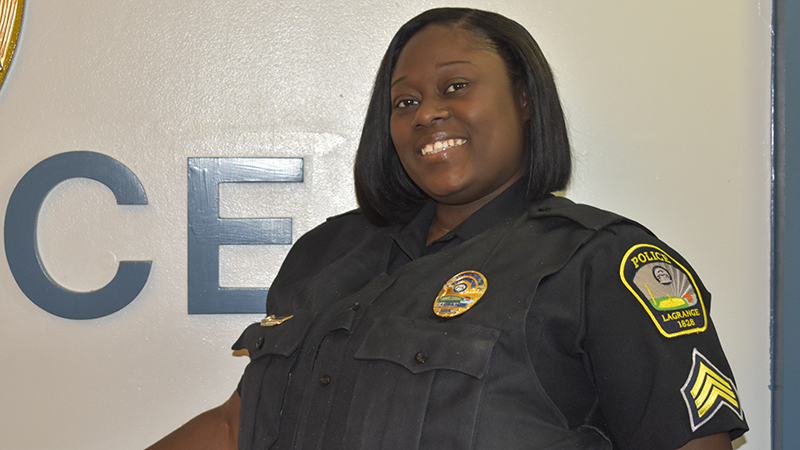 For LaGrange Police Department Sgt. Monica Peterson, 37, her job is all about community.

Peterson has been with the LPD since 2005, when she left the U.S. Army. At that time, she did administrative work. Since then, she has served in several roles within the department and has influenced the direction of community programs.

“I did D.A.R.E. I loved that — going to elementary schools,” Peterson said. “Then I brought in a brand-new program from New Jersey here called L.E.A.D., [or] Law Enforcement Against Drugs, and I graduated in the first class in Georgia.”

Peterson said the switch from D.A.R.E. to L.E.A.D. was prompted by changes to the D.A.R.E. program and the different focuses in the programs.

“L.E.A.D. continued a component with marijuana, and it also talks about different narcotics,” Peterson said. “It doesn’t just talk about the scary stuff — ‘if you do drugs, this will happen to you.’ This is more [about how] you have choices, and it teaches you how to make better choices.”

Peterson said that she expected the L.E.A.D. program’s primary impact to be increasing understanding of the harmful effects of drugs, but after a few years, the biggest impact that she has seen has been the relationships cemented between students and officers leading the program.

“I’ve seen police officer-children relationships come together, because the L.E.A.D. program asks the parents to get involved, and we give kids homework,” Peterson said. “We get to sit and talk to the parents. We talk to the kids. It is almost like we are bonded.”

Peterson said that she saw the work she did in schools having an impact on local students — from the children who excitedly greeted her in the halls to a child with behavioral problems who agreed to stay on his best behavior all week, if he could eat lunch with Peterson.

“Those types of relationships that get built, you can’t replace,” Peterson said.

Now that she is in patrol, Peterson finds herself working with the community in different ways, but for her, the job is still all about relationships.

“It is different for me now as a sergeant in patrol because I feel like I have more say on how cases are handled,” Peterson said. “Coming from a community and being able to work with the community, it makes things so much better.”

— Story and Photos by Alicia B. Hill