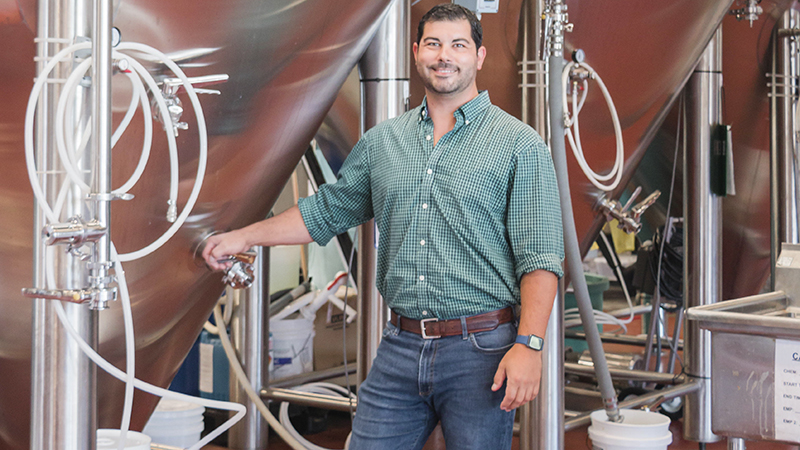 Brewing beer is a unique form of science, something Wild Leap Brewery co-founder Anthony Rodriguez discovered when he was working for a hospital in Atlanta.

In between study sessions for the MCAT exam, Rodriguez worked part-time at a brewery where his passion for crafting beer was sparked.

He and his business partner Rob Goldstein began to craft their next move, as well as the kind of product they wanted to create.

Through careful engineering and patience, the Wild Leap founders created a tasty, well-balanced product that earned them a quick fan base in the LaGrange community.

“We just try to make a well-balanced product,” Rodriguez said.

“Some products can sometimes overdo it on one side or the other, so we always shoot to be well-balanced in any style to make the easiest drinking version we can.”

Such precision and passion recently helped crown Wild Leap as USA Today’s Best New Brewery in the country, an honor Rodriguez says is thanks to LaGrange’s warm reception to the brewery’s product.

“We haven’t been here very long, but we managed to establish an amazing group of people that really enjoy the product,” Rodriguez said.

“It’s something the fans chose, and we were lucky to edge our way to the top.”

Rodriguez advises anyone who has a passion they want to turn into a reality to do one simple thing: take the leap.

“When you believe in something, it’s a lot easier to share that passion with everyone else,” Rodriguez said.  “A lot of times we spend our time saying ‘I want to do this’ or ‘I want to do that,’ but we never really take that step. I think the hardest thing is taking that first step, and even that second step after that, but you have to push through it. The best advice I can give is just get started.”

To give back to the community for their support, Rodriguez serves on the Downtown Development Authority board and works on various fundraiser events.