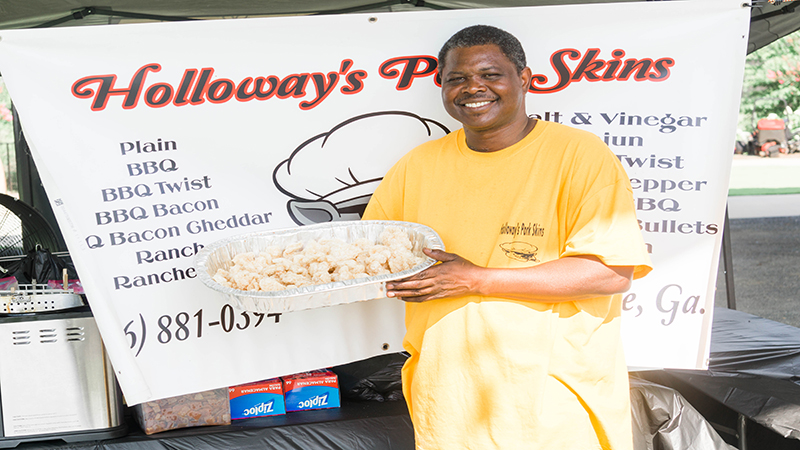 Daniel Holloway, local entrepreneur and owner of Holloway Pork Skins, is no stranger to hard work but recent health issues have slowed him down.

Holloway underwent spinal surgery earlier in July that is meant to help with his limb movement. However, the surgery has meant having to pull back from the work that has made him a well-known face in the community.

“I had limbs that weren’t working and a leg that still bothers me,” Holloway said. “We’re making progress, but we aren’t back yet.”

The business owner said that he will have to take it easy for at least a year and a half, but locals can still expect to see his tent at local events. During his recovery, Holloway’s son and other family members have stepped in to assist with the business.

Meanwhile, Barbie Watts, director of promotions and marketing for the Downtown LaGrange Development Authority, teamed up with Sandy Lee, a friend of the Holloway family, to set up a GoFundMe account for the community to contribute to.

Watts said she has known Holloway since 2013 as a business vendor and wanted to help him after she found out about his health problems.

“I reached out to him about setting one up because I know they’ve been very successful,” Watts said. “He said he did not mind and welcomed it because he needs the help right now.”

The money will help cover Holloway’s daily living expenses and other needs the family may have during his recovery.

Holloway said that the community may help by continuing to support his business.

“The more support we get the better off we’ll be,” Holloway said.

To make a donation to Hope for Holloway, visit his page on the GoFundMe site.