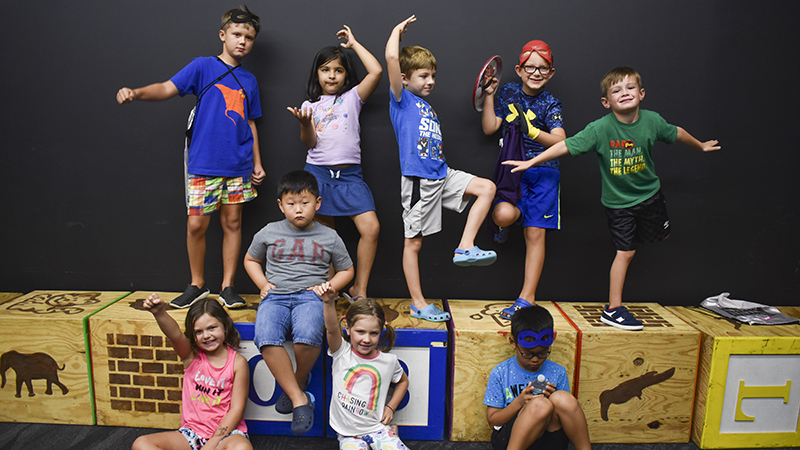 Students strike a pose during the Acting Heroes camp at the Lafayette Society for Performing Arts on Thursday. The week-long program taught students in pre-k through sixth grade about acting. (GRACE BRASWELL | Daily News)

With summer coming to an end and school about to begin, the Lafayette Society for Performing Arts takes one of the last weeks of summer to introduce a new program for children ages pre-k through sixth grade.

The “Acting Heroes” themed camp began on Monday, July 29, and will end on Friday. The camp is new to LSPA and was introduced as an option for younger students who are interested in theater. The camp is broken up by age group with pre-k through second grade students taught by Sophie McDow, and third through sixth grade student taught by Carol Cain.

“Most of the students are new and not from the academy,” said Amy McDow, director of the Lafayette Theatre Academy. “This program allows our younger students to meet the teachers at the academy and to introduce them to acting.”

The theme, “Acting Heroes,” is to help campers break out of their shell and allow the kids to be in a space where they can gain confidence, according to Sophie McDow. Camp organizers hope that through acting, the students will be able to gain social skills, make friends and freely express their inner hero.

“This camp has been so fun. All the kids are so energetic and ready to learn,” said Sophie McDow. “Even the shy kids have been able to find a way to express themselves. Watching these kids grow and find their moments of confidence has been priceless.”

A repeated moral taught at the camp has been that it is okay to lose sometimes, and it is important to learn from mistakes. The camp is also designed so that the young actors are able to acquire an ability to speak in public in an atmosphere that is nothing but supportive.

Celina Bakshani, a 7-year-old camper, said that she has learned a lot from the camp, and she has made several new friends along the way.

“I learned how to act, and how to be a superhero,” said Bakshani. “My friends have been really nice, and they teach me how to be a good friend.”

There will be a showcase featuring the “Acting Heroes” campers Friday, Aug. 2 at 4:30 p.m. in the LSPA building.

The event is free for the community to attend and will give LaGrange the opportunity to see what LSPA has in store for the upcoming season.

Two arrested in break in at Highland Marina